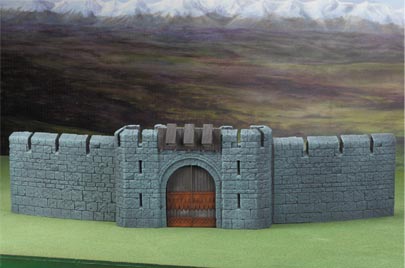 As Saruman the fallen wizard sends his hordes to assail the lands of Rohan, King Théoden calls all his people together to take shelter in the fortress of Helm’s Deep. Built across the mouth of a high-walled valley at the base of the White Mountains, the fortress consists of the tall Hornburg tower, a wide keep with room for the entire army of Edoras, and the long, arcing Deeping Wall with it’s stone battlements. Properly provisioned, the nation of Rohan could shelter indefinitely in Helm’s Deep from even a very large host, but never have they faced an assault such as that which Saruman had prepared.

This spectacular box set consists of a three-piece resin set of the massive gateway of Helm’s Deep, hand-painted and ready for use. Constructed in scale for the models of The Lord of the Rings: The Two Towers, it will be the centerpiece of many of the scenarios for the game as well as countless others players will create on their own.

The piece is $75.00 US and can be found here. This is a limited piece and will sell out fast, so if you want one get it soon!