From the folks at WETA: We are very excited to announce that Weta’s good friend and renowned Tolkien illustrator, Alan Lee, will be doing a book signing at the Weta Cave.

Entrance is free and you should take the opportunity to explore the rest of the Weta Cave at the same time. More… 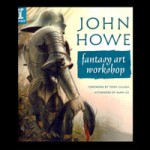 Weta is pleased to host one of the world’s most acclaimed Tolkien illustrators and designers, John Howe, for a book signing at the Weta Cave. Currently visiting Weta Workshop, John Howe was of course also one of the principal designers on Peter Jackson’s The Lord Of The Rings. John Howe will be signing two of his fantastic volumes and a postcard. END_OF_DOCUMENT_TOKEN_TO_BE_REPLACED 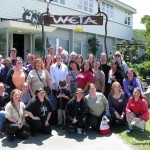 The March 20th edition of the WETA Newsletter mentions TORN and our ‘Cruise to Middle-earth’ vacation we posted about earlier in the year. Ringers on the cruise stopped by the WETA Cave for a very special treat. From the newsletter: “Our friends from T.O.R.N visit the Weta Cave – On a Cruise To Middle-Earth, a large group of Tolkien fans from TheOneRing.Net came to visit us. It was a real pleasure to have you here and to show you around. It takes a special kind of fan to travel all the way to little New Zealand. In the photo you also see Richard Taylor, Tania Rodger and Daniel Falconer who hosted the group on their visit.”