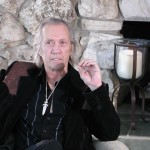 We originally met David among the crowds of Dragon*Con in Atlanta. I believe it was 2001, but the memory is not an exact science these days. The team of us were putting together a list of luminaries and Tolkien supporters that we thought would like to speak on camera for a project we had called RINGERS: Lord of the Fans, and we walked up to David just as any other engaged fan would come to an autograph table — slightly nervous yet pleased to have a handshake with a performer of such stature. END_OF_DOCUMENT_TOKEN_TO_BE_REPLACED