Melilot sends along word: Regarding the launch of the new book on Hilary Tolkien: It’s been canceled. Andrew Compton sent along a message to explain things – I thought you might want to know before too many people are getting their hopes up. It’s a great pity I think.

Andrew Compton writes:
“I am sorry to have to advise that despite the tremendous work and dedication to this project by Angela Gardner, Neil Holford, the Publishers, designers, artists, and financial backing by ADC Publications Ltd I have no choice but to cancel the publication of the book for legal reasons. END_OF_DOCUMENT_TOKEN_TO_BE_REPLACED 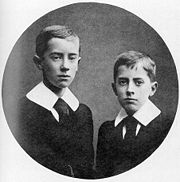 From fantasybookreview.co.uk Former book shop owner and huge JRR Tolkien fan Angie Gardner will see her own work hit the shelves at the end of January. She has compiled the memoirs of JRR’s brother Hilary Tolkien and told MK Today why she got involved with the book. “Hilary is not as well known. The lost tales refer to stories he left in an old notebook and some of these go back to the stories he and his brother – who went on to write The Lord of the Rings and The Hobbit made up when they were very young.”

Angie is confident Black and White Country: The Lost Tales of Hilary Tolkien, will be popular. When he was three years old, Ronald (as he was known to his family) and his younger brother, Hilary, were brought back to England by their mother, Mabel Tolkien. Before they could return to South Africa, their father died there of rheumatic fever, so Mrs Tolkien and the boys remained in England. In 1900, Mabel Tolkien experienced a conversion to the Catholic faith; this event had a lasting effect on Ronald and Catholicism became a motivating force in his life and writings.

Sign up to learn when ‘Black & White Ogre Country: The Lost Tales of Hilary Tolkien (Hardcover)’ becomes available for Pre-Order!