It looks like, in addition to his work on the Extended Edition for the Battle of the Five Armies, Peter Jackson will be investing a bit of his time this year to launch a WWI museum. Is it too much to think this might be a pointer toward that Dambusters project?

If he has any plans for future blockbusters, he’s not saying.

Jackson was speaking at his New Zealand post-production facility where he was helping host an event to promote the local film industry. Directors Jane Campion and James Cameron also attended.

Jackson is a World War I history buff who owns a number of planes from the era.

He said the plan for the Wellington museum was to open during April to mark the 100th anniversary of the Gallipoli battle.

He said more galleries would be opened over the coming four years to mark other battles in which New Zealanders fought.

The New Zealand Herald newspaper reported earlier that Jackson had been recruited by the government to curate the museum, and he was expected to gather aircraft, tanks and other artifacts from private and public collections.

We are so humbled by everyone’s support. More than 1,000 people have pledged and scores of people have reached out to donate items or their time to help our party fundraiser. You are all awesome!

However, the poster will only be given away IF we reach our goal! If we get to $180k by (or before!) the deadline on Sunday 18th, one name will be chosen at random to receive this amazing poster and wristband. Each new pledge of $10 or higher during this final week will be a separate entry into the draw. That’s right: the more times you pledge, the more chances you have to win! 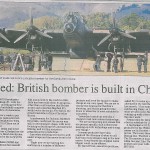 Ataahua writes: At an aerodrome in Masterton, Peter Jackson tested new camera technology with the help of a life-size replica British bomber. “We are not shooting any scenes that are project specific; this is about just keeping up with technology and trying new things,” he said.

Drop us a line if you have more info on this!

With a trademark eye for detail, film-maker Peter Jackson has hired an astronomer to ensure the moon’s position in his movie Dambusters is spot-on. A full moon was key to the May 1943 Dambusters raids, in which Allied planes bombed German dams at night. Former Carter Observatory senior astronomer Brian Carter, not related to the founding Carter family, was asked to research the moon’s position over Germany at the time. “Somebody just rang up. I didn’t realise it was for Peter Jackson until later.” Mr Carter has since been made redundant from the observatory and has set up a paid service providing information about celestial events. Computer software allows him to find where the moon was at any time, anywhere on the globe. Moon gives light to Jackson film

British writer and comedian Stephen Fry is back at work on a third draft of his screenplay for Peter Jackson’s remake of The Dambusters after being delayed by the United States writers’ strike. Fry also had interviewed squadron members of the famous raid and production staff had visited locations in Britain and Germany where the World War 2 events took place. Jackson is producing the remake of the classic war movie, to be directed by special effects expert Christian Rivers, and has commissioned Fry to write the script. Fry revealed details of his scriptwriting on his internet blog and podcast. He said he spent time last year “zooming around England meeting old survivors of the original raid and people connected with survivors” as research for a second draft of the script. Fry resumes work on Dambusters screenplay