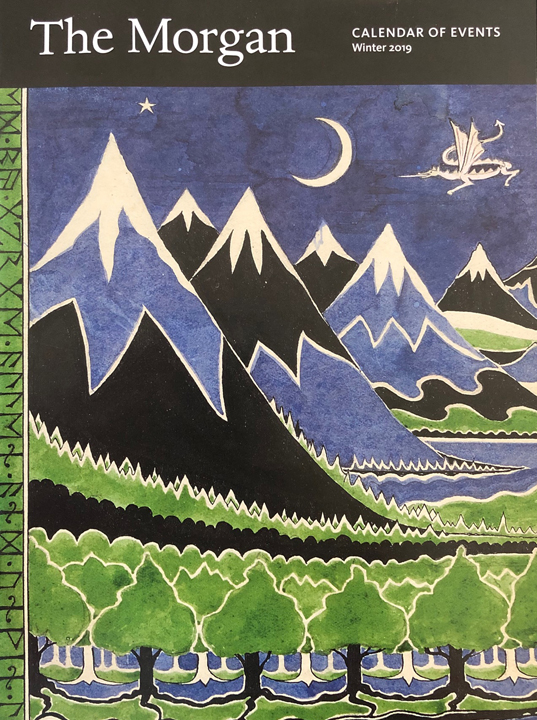 I recently visited “Tolkien – Maker of Middle-earth”, an exhibit at the Morgan Library and Museum in New York City, which runs through May 12. The exhibit is the most extensive display of original Tolkien material gathered in one place for several generations. It includes pieces from The Morgan, The Bodlein Library archive at Oxford University, the Marquette University Libraries in Milwaukee, and private lenders. It takes you on a journey through the life of John Ronald Reuel Tolkien (or as we know him – J.R.R.) with photos, letters, text, and Tolkien’s own work. For me, it was a truly awe-filled and emotional experience.

To enter the exhibit, you walk through the round green door of Bag End to behold a wall-sized mural of Tolkien’s painting of Hobbiton. There are other murals throughout the exhibit, and it is cool to see his work so large because things that are usually seen as tiny details are suddenly more apparent, and you are drawn in to the landscape. But the real attraction of the exhibit is Tolkien’s actual work.

On display is an extensive selection of his original drawings, paintings and hand-written manuscripts. I can’t possibly describe in words what it is like to stand in front of the original hand-painted dust jacket for “The Hobbit”, replete with Tolkien’s handwritten comments in the margins; to view “Conversations with Smaug” so closely that you can see J.R.R’s brushstrokes; to revel in the light of “The Forest of Lothlorien in Spring.” One of my personal favorites is “Bilbo Comes to the Huts of the Raft Elves”, the image chosen for the exhibition’s catalog cover. If you can’t make it to the museum, I highly recommend this book with the same title as the exhibit. It is available online and includes full color images of every piece in the exhibit along with the accompanying text.

There are early sketches for The Doors of Durin, which were a special treat for me because I recently painted a life-sized version of the West-Gate of Moria (Speak “Friend” and Enter) at Scum and Villainy Cantina in Hollywood, where Torn Tuesday is broadcast from. There are even pages Tolkien created to look like they were from The Book of Mazarbul – the book that the Fellowship finds besides Balin’s tomb – hand-calligraphed, painted, torn and burnt. Tolkien the artist could have found himself a place on the team at WETA.

There were many manuscript pages filled with Tolkien’s tight, flourishy handwriting, written first in pencil, then erased and crossed-out, then written over in ink. It’s amazing to me that these were able to be deciphered and included in the books.

There were quite a few different, and often large, hand-drawn maps of Middle-earth; original book jackets for LotR; some of the charming drawings and letters from Father Christmas that Tolkien sent to his children. And there were illustrations I’d never seen before – beautiful pieces expressing Tolkien’s vision of Fairy and his ideas about how creativity flows. There were even full-sized newspaper pages crammed with his colorful doodles, some quite Elven in style.

One thing that really struck me was a hand-calligraphed letter that was meant to be reproduced and included at the end of the Lord of the Rings, but unfortunately, the publishers nixed the idea. The letter was from Aragorn to Master Samwise, letting Sam know the King would be stopping for a visit outside the Shire. The letter has two versions side-by-side written in Tengwar – one in Sindarin, the common tongue, and one in the high-Elven speech, Quenya.

And there was mention of an epilogue for LotR that Tolkien wanted to write. In it Sam was to tell his family what happens to all the characters after the end of the Lord of the Rings. When I researched this further, I found a snippet of his intended conclusion, which appears in the ninth volume of “The History of Middle-earth”:

‘… said Elanor. “A story is quite different, even when it is about what happened. I wish I could go back to old days!”

“Folk of our sort often wish that,” said Sam. “You came at the end of a great age, Elanor; but though it’s over… things don’t really end sharp like that… There are still things for you to see, and maybe you’ll see them sooner than you hope.”’

It makes me think Tolkien knew that his epic story would go on and on, even if he could never have imagined the film-making technology that would become available to make it happen.

I hope you have a chance to see the exhibit, for it is truly incredible and a joy to behold.