Bakshi describes the often tumultuous process of getting the film made, bouncing back and forth between studios, before finally moving forward on the project with producer Saul Zaentz. But before production could move forward, there was still one more step he felt he needed to take.

It was important to Bakshi to get the blessings of the Tolkien family, and he traveled to England to visit Tolkien’s daughter Priscilla. “I told her how I was going to make the film, and if she didn’t like it I wasn’t going to make it,” remembers Bakshi. “She loved what I had to say and she took me to Tolkien’s studio in Oxford.” 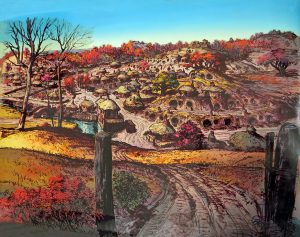 While Bakshi would create an animated film, he had decided to take a “mixed-medium approach” to the film, utilizing traditional animation, live action film and a technique known as rotoscoping (where animators trace over a live action image for a more realistic effect).

“I always thought that mixing styles was proper, and that’s why I was able to mix live and animation and get a really interesting effect; let’s call it collage,” declares Bakshi.

Bakshi would, however, find the production to be nearly overwhelming. For as much as he loved the story, the process of making the film came with great difficulty.

“I nearly died,” he says candidly. “It was the hardest thing I had to do in my life. I didn’t have the budget for producers. As I was shooting the picture live-action in Spain, I was running the company on the phone through my secretary and my production manager. I didn’t get much sleep. It was the hardest thing I ever had to do. But the animators loved me. And I had tremendous support on all my films from these guys because they loved what they were doing and they knew what I was trying to do. They held it together.” 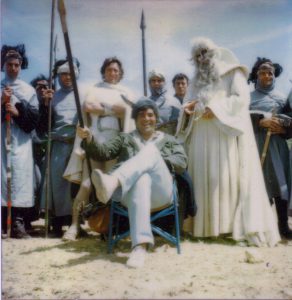 As is well known by now, the film was originally meant to be a two part adaptation of Tolkien’s celebrated work. However, closer to release, Bakshi was in for a surprise as he learned the studio’s plans for marketing the film. They had decided to remove all mention of it being the first of two films.

…when I handed it in a week before release, what we used to call wet prints, to the theater. They showed me the advertising campaign and I said, ‘Where’s the Part One?’ And that’s when I found out.”

The experience was disheartening for the director, who describes a fight with Zaentz over the debacle and an extinguished desire to continue the project. Still, he lost none of his love for Tolkien. Asked if he would like the opportunity to finish his project, Bakshi replies:

“Now that Saul Zaentz is gone, I wouldn’t mind being involved. If Warner Bros. wanted to make part two and three in animation, I would consult. I’d be very happy doing that.”

Read the full interview at The Hollywood Reporter to hear more about the production, including how Led Zeppelin and Mick Jagger were almost involved in the film.