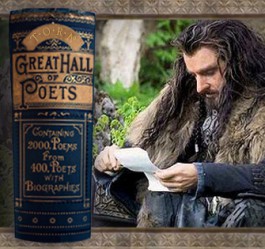 THE SONG OF YAVANNA AND THE GOLDEN TREE

O Sun which rises in the east, and sails across the sky:
Final fruit of the Golden Tree, and sign of hope nearby.
To west, O west, it draws our hearts, and with it, travel high,
To Kementari’s pastures growing gold till death may die.

The sun, in blessing Arda, spends her strength to make it warm…
For trees and fields of Middle-earth, for crops of wheat and corn,
All fruit that swells on bough and vine, let songs our hearths adorn.
Those who love the Sun do love the Tree from which ‘twas born.

Earth! O Middle-earth, whose soil so long the Wise defended
By quiet care, its gifts to share, its wounds we’ve kindly mended,
Though trouble stirs in evil’s acre, gardens we have tended,
That from these labors, all may find the Golden Tree befriended.

The beauty of water quenches the thirst of the verdant vine and hops,
And the laughter of streams and the sweat of men produce abundant crops.
O Kementari, bless these fields and orchards with many raindrops
That the Golden Tree may grow from sea to misty mountaintops.

O Golden Tree! Yavanna sang you, shaped you, mourned your dying;
Rejoicéd when its scion, Sun, shone Light (the Dark defying);
She likewise saw the fruit of the Sun was to all Men satisfying,
And looks for fruit of gratitude, rising to Lands Undying.

O in my dreams I visited the old kingdoms again,
Westward now under the Sea:
Nagothrond beside the mighty Narog,
Gondolin, a jewel among the snowy peaks,
Tol-Sirion and halls of Vinyamar,
Strongholds of Hithlum and Himring,
Ard-Galen where battle cries and war horns long echoed.
Cities in proud array and banners freely unfurled!
Rivers loud and merry and towers tall as hills! –
The glory was brief as a day;
The lamentations that followed were bitter and long.
Great kings and noble lords,
Routed, slaughtered, betrayed, despaired;
By grief maddened, in madness sought death.
Brittle were they as dry reeds in a winter frost,
Swiftly broken, yet never cowered or bent.
So our youth passed as one long fair spring,
Its summer lost in great flames of darkness,
And the ashes of autumn, mingled with winter snow,
Drift by hidden places where harp strings are frozen and silent:
For all have passed west over the Sea
To a long twilight and a long sleep,
And no second spring will come again.

The Dead of Dunharrow

Who comes to disturb our rest?
Who dares to enter our hall?
Whose voice does the silence seek to break ?
Are you the one to whom we answer the call?

Eons we’ve waited to repent our shame.
In twilight forgotten and lost.
Awaiting the call from Isildurs last heir.
Whose allegiance we forsook to our cost

Redemption we seek to salvage some honour
Final rest from the curse of the stone
At Erech we will meet to renew our vow
That this King will not fight alone!

We will follow out into the night now
We will march with this King to the sea
We will open all paths blocked before him
We bring terror and fear as our key!

Most all guysThey hurts our eyes,
They just don’t care.
Dwarves won’t comb beard,
Rangers smell weird,
So hard to bear.
But Elven folk
Great joy provoke:
So nice! So fair!
And now we wish-

Quiver ever on his shoulder;
Beneath dark eyebrows elf-eyes smolder;
Few words he speaks, never fatigues,
Immortal, wise, can see for leagues.
Won’t sink in snow;
A joy to know;
Such pointy ears!

Dramatic stare ever-sending;
Supply of arrows never ending;
Thinks that lembas is a treat
Thinks that it’s a useful feat
To surf down things;
And fights for rings
(From all we hears)
Can’t muss his hair.
So blond, so fair!

What a joy to meet!
To come across
A Legolas!
That would be sweet.