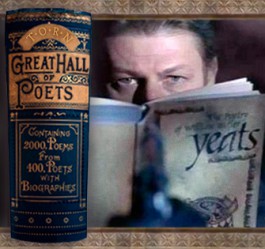 I had a dream, little brother
A terror of the night
That when Father burned the swan-ships
In that fire dread and bright
You had crept aboard
To sleep over the waves
And that the flame-lit ocean
Was your grave.

I woke, by icy panic
Robbed of breath
But found you lay beside me, still
In sleep, not death.
Your face, a mask of quiet
That mine lacked
More peaceful than I’d seen
Since fire-words sealed our pact.

I was quick to Father’s oath
You took it slow
Slow to farewell our mother
Or to go.
And when the others left
We swore an oath
That death would take us
Neither one, or both.

Gone is the hope
I clung to when we came
I guess not what downfall
Our breath will claim
Though death will have its due
For our rash curse
We’ll breathe our last
Together, as our first.

As I lay here, body broken, bones shattered
I feel no pain.
I feel calm and strangely satisfied and at peace.
The soft grass comforts me as I feel the the presence of an old friend. Death.

My most trusted of friends!
How far we have come to reach this, our moment of glory.
Will they remember how you smashed through spear and shield wall ?
Will they see how you never faltered or failed to rise to my demands?

Broken now as am I and yet, in death, still my shield.
Tirelessly you rode through feared wood and plain to bear me here.
We broke the Haridrim ranks and took their Black Serpent banner.
My friend, my companion, my protector.

Sister-son and blood of my blood.
I have led you to this place of death and destruction.
You have not faltered or strayed to the whispers of false allies as did I!
True and fearless you are, as befits a Lord of the Riddermark.

Tall in the saddle you ride to lead the First Èored.
Fierce and proud you have honoured our Kin and fulfilled our pledges and oaths.
Kingly you are and King you will be, my beloved Sister-son.

Arisen we are, we riders of Théoden!
Fell deeds have been awoken to fire and slaughter.
Spear shaken and shield splintered,
A sword-day and a red day and the sun has risen!
Now at Gondor’s gate I lay here.

My eyes grow dim and Death stands over me.
I believe in you and kept faith with you, though you have yet to come.
But come you will, though we parted in doubt at the Dwimorberg were you sought the Dark Door.

I see you there my son. Tall and proud and unscathed by the White Hand.
Yes I will willingly walk with you to the Golden Hall of Meduseld to join our fore fathers.
For I have killed the Black Serpent and regained my honour.

We go now in glory to join Bèma and Nahar in the everlasting hunt .
There we shall ride in the warm sun and oceans of green grass and forever watch over our people and lands.
I am ready now.

The Lay of King Brian

from the heart and hand of
Veracity O’M.

As Bilbo, so Brian
A man of comfort, conversation, and culinary interests
He would of frequent occasion gather to himself
those who were of like mind and likes
And on such times he told tales vere and feign
Tales of heroes, of maidens, of imps and animals
He sang oft of the fairy realm whence he journeyed
Many miles, many days, hardships and heartwarmings
Filled his time and his travel—of those he sang
To brothers, sisters, their children and his
And upon a magic fiddle he put forth his music
Music to conjour dreams, images fair and fantastic
Music to move the heart, well the eye, enchant the mind
Music, it is said, to coax animals of skills fantastic
To come close for conversation and company
Dragons, unicorns, pegacorns, and pegapigs
Hazirim that would dance and swoop in the heavens
And on the right note, would light close at hand
And listen, and look, and laugh
At his friends and at his tales
It (the fiddle!) has come to this humble brother of his
And from his hand it was set among the most valuable things
Found on earth or in heaven
Come if you would, and try your hand
And see if from the sky you could coax to your side
Dragons, unicorns, pegacorns and pegapigs
But, if you can, make sure you have tales fantastic to tell
As King Brian, whom we all miss so well.

A Legend from Times Forgotten

Neither sword nor bow
Could tell the fate
Of those lands that
Where under moon, and under spell.

The brightest steel, of mighty spears
Could not undone, what had been made.
The kingdoms there, they felt the doom
And fear then, filled all their souls.

For It was made with malice great
The heart so dark, in turmoil burned.
The other one deceived and slain
His name preserved, beyond the times of mortal lands.

He looked for it, no rest no sleep
His army bound to the oath they took
To fear the One and to serve Him
Behind the walls, and towers dim.

It called him loud, He could not hear
But swift as wind, nine horses sped
To lands unknown, in quest for it
To look for him who stole the fire
And wields the wicked, almighty power.