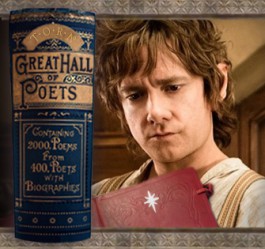 SONG OF THE WOODMEN

In ancient times Three folk began:
The Elves, the Dwarves, and the race of Man.
Beckoned by Light alive in the West,
They came by sunset paths to rest.
The Blessed Béma and his steed Nahar
Were hunting our forests by light of star.
Then darkness grew and sought to curse
The goodness of this Middle Earth.
Thus first division of the Brave;
Elf-friend or shadow-slave.
Banners of houses noble and sure
Beor, Haleth, and Hador they were.
Much lore is lost of the times back then,
When our folk were cloven once again.
Many Men to Westernesse left,
And Middle-earth was long bereft
Of heroes to fight against the Dark.
All was wild, yet ears would hark
To hunting horns and village halls
Where fires warmed, and story scrawls
Its glorious deeds on wooden walls.

Good was the day when faithful oars
Beyond the mountains, returned to shores
Of Middle-Earth, from Numenor.
Kingdoms arose! While Greenwood the Great
Grew and throve with a different fate.
Free men lived in the Eastern Eaves
Where autumn winds blew crimson leaves.
Their halls were built from mighty trees
And shaped the stables for their steeds.
We ruled the plains, Rhovanion,
And of that land, lived many on.
Then Gondor’s foes from bitter East
With swords and cries they broke our peace.
Wainriders strove with Northmen, yet
We made them pay their own blood-debt.
But in those days a plague befell
And slew our people, a killing spell.
Hearths were cold, bodies buried;
Bairns not born, maids not married.
A tenth of our strength remained to wander
And from those days we lived asunder:

Men of Dale, Rohan, and our Wood.
Yet still we served the Light and the Good—
This third division broke our speech
As one forest holds oak, elm, and beech.
Our Greenwood changed, by Sorcerer’s will
In Elvish ruins: Dol Guldur’s hill
Made it Mirkwood; in deepest clearing
Webs were woven for our fearing.
Orcs and wargs from mountain lairs
Poured out to catch us unawares.
Then mighty halls were built to stand
Defiant in the Middle Land:
Woodmen-Town, there lit by Lamp
And filled with life, our ancient camp;
Woodland Hall, with bowmen bright,
And clever carvings for second sight;
The Mountain Hall, a fastness grim
To shake a goblin’s knees and shins;
And Rhosgobel, the Wizard’s seat
Where wisdom lives, and our folk meet.
May all be merry, and the mead be sweet.

The Walls of the White Tower

‘Flee! Flee for your lives. Abandon the walls
Go home to your wives’
The Darkness is spilling over Pelennor field.
We watched and we saw poor Osgiliath yield.
Faramir, our Captain, the Stewards last son, has failed to return, now we’re ordered to run?

Row upon row of our enemies come crawling
One by one our defences are falling
Like ravenous insects they won’t stop til they’re sated
And the White City runs with our blood unabated.
Whilst high up above, death screams in the air
The Nazgul are filling stout hearts with despair.

Lord Denethor saw this in dreams in the Tower
Has it stripped him of courage and relieved him of power?
Why does he come now to talk of defeat?
Whilst down on the Pelennor the war drums they beat.
Oh where is Lord Boromir ? Oh why did he fall?
What will become of the men on the wall?

The darkness grows deeper now, no light at all.
Deep as the despair that runs on the wall.
Fear, it is gripping the hearts of the men
Resolve it is fading as the cry comes again
‘Abandon the walls . Go home to your wives’
Should we give up our post? Will they spare us our lives?

But wait! Somethings changing! A new voice rings clear.
Commanding the men to ‘Stand fast. Show no fear!’
It’s Mithrandir, the Wizard he has taken control
To face down the war machines as slowly they roll
Over the Pelennor, approaching the wall.
‘You are soldiers of Gondor. Now fight Men, or fall!’

The darkness is shifting to the White Wizards light
As we stand there beside him, ready to fight.
The great gate is broken but the walls they hold firm
Defended by Men now with courage returned
And up from the docks comes the Flame of the West
The blade that was forged for dark deeds to atone
Our King! He’s returned to reclaim his throne!

Dark clouds now are fading to the light of first dawn
Blown back to Dark Mordor by a Rohirrim horn.
Oaths honoured, not forsaken, our allies are here.
As from the great wall, the danger breaks clear,
Whilst the enemy’s mad bloodlust turns slowly to fear.
The walls they run red now as we give forth our all
For united we stand knowing Gondor won’t fall.

A deadly lady,
who lives on her own.
She waits patiently,
in her halls of stone.
High in the mountain,
lies her evil lair.
She hates all lifeforms,
and doesn’t like to share.
She feeds on her prey,
caught in her sticky cob.
You’ll never escape,
from the lair of Shelob.