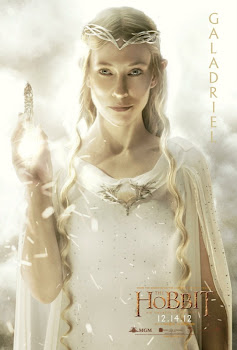 I haven’t yet seen The Hobbit: An Unexpected Journey, but what I’ve seen and read of the White Council sequence has intrigued me.

Not because of the sniping between Gandalf and Saruman (although that in itself is worthy of a separate discussion), but for the superficially strange behaviour of Galadriel. I write “superficially” since I believe when you think about what’s going on more deeply, it reveals a key character trait that most readers (and viewers) overlook.

In the clip, Gandalf and Saruman are at odds facing each other across the table. The two Noldorin elves are distant from the … exchange … but Elrond approaches the two Istari to push home his point about the Watchful Peace.

On the other hand, Galadriel waits, watches and circles. A bit like a hawk striking, she makes her message count: “Let him speak”.

At first this action struck me as deeply calculated, and I found this off-putting.

Then I realised that must be the point. Because Tolkien’s Galadriel is a deeply political animal. A meddler par-excellence, if you will.

This is something that’s often subsumed beneath the idea of Galadriel as one the most potent exponents of _magical_ power in Middle-earth — the wielder of Nenya, creator of the eponymous phial filled with the light of Earendil’s star, and owner of the mysterious Mirror that reveals past, present and future. 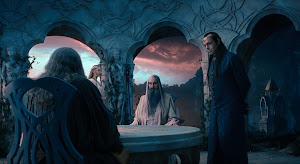 And that’s often the default interpretation of elves — ethereal and majestic beings wielding an unknowable and puissant magic. It’s an idealistic interpretation reinforced by the stereotypes that litter scores of lazily written pulp fantasy novels, Dungeons and Dragons and World of Warcraft. And the pretty but vacuous artwork that tends to accompany all that.

But scratch the surface of Tolkien and you’ll find Middle-earth’s elves exhibit their own share of (jealousy-driven) brutal politicking. The end of Finrod’s rule in Nargothrond is one example. The overthrow of Galadriel and Celborn’s lordship over Eregion by the Gwaith-i-Mirdain is another (which we’ll explore further in a moment).

Galadriel’s history is, of course, convoluted and inconsistent. But across all these variations, themes do emerge. One of these, I believe, is that Galadriel desired to wield (political) influence over others.

“She was proud, strong, and self-willed, as were all the descendants of Finwë save Finarfin; and like her brother Finrod, of all her kin the nearest to her heart, she had dreams of far lands and dominions that might be her own to order as she would without tutelage.” (Unfinished Tales, The History of Galadriel and Celeborn)

When the Noldor leave Valinor in the wake of Melkor and Ungoliant’s destruction of the Two Trees, Galadriel’s desire to achieve greater things is plain:

“Galadriel… was eager to be gone. No oaths she swore, but the words Fëanor concerning Middle-earth had kindled in her heart, for she longed to see the wide unguarded lands and to rule there a realm at her own will.” (The Silmarillion, Of the Flight of the Noldor) Later, after Morgoth is defeated and the ban of the Valar is lifted, in one version of events, she — and Celeborn — reject their pardon to remain in Middle-earth:

“Pride still moved her when… she refused the pardon of the Valar for all who had fought against [Morgoth], and remained in Middle-earth.” (Unfinished Tales, The History of Galadriel and Celeborn)

This concept is reinforced when later in Unfinished Tales Tolkien writes of the origin of the Elessar:

‘”Will you then pass over Sea?” [Celebrimbor said.]

“Nay,” [Galadriel] said. “Angrod is gone, and Aegnor is gone, and Felagund is no more. Of Finarfin’s children I am the last. But my heart is still proud. What wrong did the golden house of Finarfin do that I should ask the pardon of the Valar, or be content with an isle in the sea whose native land was Aman the Blessed? Here I am mightier.”‘ (Unfinished Tales, The History of Galadriel and Celeborn)

The Lady of three different realms

No less than three times does Tolkien write about Galadriel establishing a realm of her own in Middle-earth.

The first, although possibly under the stewardship of Gil-galad, is a short-lived elven realm on the shores of Lake Nenuial in northern Eriador.

The second, (at least in one version of events) has Galadriel and Celeborn founding of Eregion as a defence and counter against menaces from the east regions of Middle-earth. 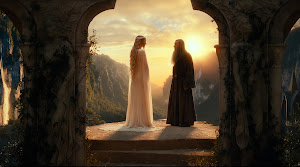 “[Galadriel] perceived that there was an evil controlling purpose abroad in the world, and that it seemed to proceed from a source further to the East, beyond Eriador and the Misty Mountains. Celeborn and Galadriel therefore went eastwards, about the year 700 of the Second Age, and established the (primarily but by no means solely) Noldorin realm of Eregion.” (Unfinished Tales, The History of Galadriel and Celeborn)

And the third, after the Noldorin smith Celebrimbor and his Gwaith-i-Mirdain supplanted her power in Eregion, as the Lady of Lorien.

“Galadriel thereupon left Eregion and passed through Khazad-dûm to Lórinand… but Celeborn would not enter the mansions of the Dwarves, and he remained behind in Eregion, disregarded by Celebrimbor. In Lórinand Galadriel took up rule, and defence against Sauron.” (Unfinished Tales, The History of Galadriel and Celeborn)

The latter two realms were organised with clear purpose: to guard the elven lands of western Middle-earth against the Shadow of the East.

From the tale of Amroth and Nimrodel: “In her wisdom Galadriel saw that Lórien would be a stronghold and point of power to prevent the Shadow from crossing the Anduin in the war that must inevitably come before it was again defeated (if that were possible); but that it needed a rule of greater strength and wisdom than the Silvan folk possessed.” (Unfinished Tales, The History of Galadriel and Celeborn)

This is prescient as Lórien, of course, later plays a key role as a bulwark against the growing influence of Dol Guldur on the area around Mirkwood.