Well, wasn’t that a surprise?! Now we’re going to have three Hobbit films to watch, ponder and dissect, not just two.

But what do TORn’s staffers make of the announcement that The Hobbit will be transformed from two films into a trilogy of its own?

Read on below the cut out and see what a few of us are thinking and feeling!

The news of a third Hobbit movie puts one question to rest, and creates a hundred more! For one, it makes me wonder at what point it became clear that there was enough material for a third movie? After the box office and DVD success of the LOTR movies, they could have justified three Hobbit movies from the outset. But they didn’t; or did they? How much ‘extra’ footage has already been shot with a third movie in mind? I suspect it must be a fair amount if they’re releasing the third movie within six months of the second.

We think we already know the plot points drawn from the Lord of the Rings appendices, so this either means those will be expanded upon, or they’ll use things we’re not even aware of yet. Oh, the possibilities! PJ, please include a hefty DVD extra to fill us in on how this evolved!

Fifteen years ago, if you said to me that The Lord of the Rings and The Hobbit were being made into six movies, after I was woken up from my excitement-induced coma, I would have said the first film and maybe a bit of the second would be the events of The Hobbit. The remainder would cover the depth of The Lord of the Rings, complete with Tom Bombadil. (Hey dol! merry dol! ring a dong dillo!)

My reaction today to the announcement that a third film is going to be released really came down to ‘Oh hell yea! We get to have another Oscar Party!!!!’ I could not be more excited to be transported to PJ’s adaptation of J.R.R. Tolkien’s world. In 2001 I was blown away by PJ’s ability to adapt this ‘unfilmable’ series, and in 2012 I’m still steadfastly ready to be treated to more. 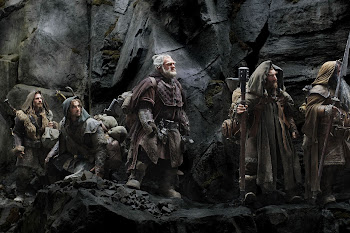 So he’s going to add a few things here and there -– cut out some favorite scene -– enhance the role of some quiet dwarf. But the fact of the matter is, we will always have the masterpieces from J.R.R. Tolkien himself. (unlike the revisionist Lucas…but we won’t go there…) And however you choose to partake in the world Tolkien created (books, films, games) we share that common bond of passion for Tolkien’s world and works. So three cheers for another film! Pass me the popcorn! PS: Things are always better in threes.

Since I find it difficult to conceive of Jackson making a bad film about Middle-earth, I’m excited about the announcement of the third film. The key to making the three work will be proper structuring, but that’s something that Jackson excels at. Take a look at The Two Towers movie, where the writers completely restructured the story and created (by my estimate) a good 30 or 35 percent of original material to expand upon the elements of the book that were included.

And throughout all three Lord of the Rings films, elements were shifted around to appear in places you might not have expected: Gandalf’s pity speech from Bag End was moved to Moria, the reforging of Narsil was moved from Fellowship of the Ring to Return of the King. The lesson to learn is that just because the book does it a certain way doesn’t mean the movie has to follow suit!

I think I must be the only staffer that’s leery about this third film. I want to believe this is a good thing and not being done out of self-indulgence. Time will tell, I suppose. As much as I don’t want any of this to end, I’d rather it ended sooner than wear out its welcome. Just my two cents. 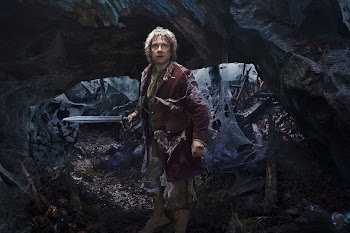 I thought Warner Bros would wait to see the success of An Unexpected Journey before committing to the gamble of a third film. They must be very sure that there’s a bucket of money hidden under Smaug and Bilbo will burgle even more of it for them with a third film.

But that brings up a key point: Bilbo’s story could be in danger of getting thin and stretched, “like butter scraped over too much bread”. In this sense, you could say that The Hobbit “stands upon the edge of a knife. One false step and it could fall, to the ruin of all”. Avoiding bloat that could turn Bilbo’s fairytale adventure into a lead affair will be the key task for the writers. We already have Star Wars as an example of what happens when discipline goes out the window. More than ever, they need to find the discipline to reject threads that are truly extraneous.

Today’s news that The Hobbit will become a trilogy brought me a huge smile. I was already pleased to be getting two films with some material added in that explained some behind the scenes stuff going on during the story. Now, getting three films that will flesh more out and flesh out more of the history of Middle-earth is pure win.

As a fan of Middle-earth the thought of seeing depth added to the cinematic version of it is music to my ears. I think in the end fans will thank PJ for this move and the normal fan will appreciate/understand the world we love so much more.

I hope this means we get to see the Goblin-Dwarf war, at least as it pertains to Thror, Dain and Azog, and I want to “SEE” Smaug destroy Dale and Erebor, not “HEAR” about it. 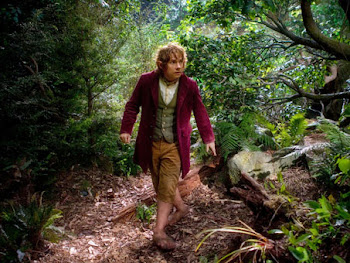 I’m delighted that there are three films! After I picked myself up off the floor, I was shaking with happy overload! I think Peter, Fran and Philippa know this is probably the last jaunt around Tolkien’s works, so why not finish the job and the story of Hobbits in Middle-earth right?

They’re so spot-on in their expansion of Tolkien’s tales. I trust their version of telling the story. I say, “bring it on” and “bring on some more… PLEASE!” I’m so grateful Peter and company are such worthy stewards of Tolkien’s work. It’s like having MORE Tolkien!

People may hear the sound of cash registers chiming, but I don’t believe this is about cashing in. I just think PJ finds it VERY hard to edit!! So I’m actually not that surprised to find it has ended up being three films. I just hope they are not too flabby — hope PJ isn’t being self indulgent. On a personal level, as far as I’m concerned, the more the better! I’m delighted to have as many times as possible to sit in the theatre and thrill to the opening of another visit to Middle-earth, grace of PJ and the team.

Three films?! One part of me is jumping up and down screaming “Yes! Yes! Yes!”, the other is worrying about what they’re adding in, remembering reactions to certain parts of the Lord of the Rings trilogy. I think it would be really cool if they included more of the backstory, the coming of Smaug to the mountain, the battle of Azanulbizar, the capture of Thrain by the Necromancer and the meeting of Gandalf and Thorin. I do know, whatever they do, I’ll be there, munching my popcorn, and enjoying the return to Middle-earth. 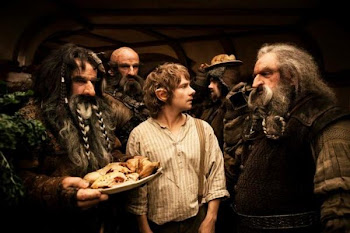 What will three films mean? The only hint, as far as I know, is that PJ mainly mentioned the appendices when he talked about all the material they couldn’t take advantage of if they stopped at two films. His mention of Bilbo seemed to hint that the new material would put Bilbo’s adventures into context. If I had to guess at this point, I suspect that even more expanded White Council/Dol Guldur attack material would be cut in at intervals during the existing tale of the Hobbit plot.

If that’s the case, it’s an expansion of the approach the filmmakers were taking already, adding appendices material to The Hobbit. There’s no hint of revertion to the ‘bridge film’ concept. I’m cautiously hopeful. I don’t hold with the notion the Hobbit could be fully told in one three-hour film or two two-hour ones. (The unabridged audio book is about 11 hours.)

Mixed feelings about a third film: is there enough material to make three movies of similar lengths? Also the second movie is called “There and Back Again”, so the end might be a given? But assuming the first movie is pretty much in the can, there is room to move/add martial from film two into a third film. Film three ending with Battle of Five Armies and maybe a prologue about Aragorn and Arwen in it to tie it to Lord of the Rings. 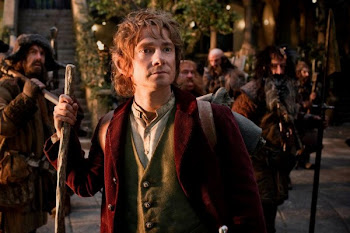 For me, a third Hobbit movie is another opportunity for joy. Lord of the Rings brought me tremendous joy, even if occasionally mixed with frustration or annoyances at certain Jackson stamps on the material. I liked how PJ phrased his announcement of the third Hobbit movie. It indicated a respect for how to expand the project and what focus and direction it should take.

I am never one to dig too deeply into movies before I go. I like to give the filmmakers a fairly clean canvas upon which to paint their magic. If nothing else, we will have three(?) more hours of score by Howard Shore. That surely can’t be a bad thing. And my heart tells me that joy will be found in many likely and unlikely places — on screen and off — as we journey there… and back again. I look forward to our journey.

It’s easy to be cynical. We may indeed be witnessing Warner Bros. machinations to gain maximum profit from their risky investment (obviously that’s the movie business). However, I’m inclined to believe the true impetus from Jackson and his co-writers is to expand the story beyond the original Hobbit book with the rich tapestry of other events described in The Appendices of Lord of the Rings.

Personally I am thrilled with having more instead of less. Now, if PJ hadn’t licensed all that extra material — that Tolkien himself struggled to complete and cram into the earliest editions and over which he fussed with his publishers — then the Hobbit would’ve stopped at two flicks.