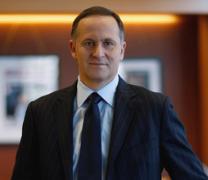 TORn message board member Owain has alerted us to an interview with NZ Prime Minister John Key over at the New Zealand Herald. Mr. Key believes The Hobbit movies can be saved and he says he is going to do his best to achieve that end when Warner Bros. executives arrive in New Zealand next week to begin preparations to move the films off-shore.

Here follow a few of his comments from the aforementioned interview:

“My concern is that if Warner Brothers deems New Zealand is not a good place to make movies, then there is a real risk other major film production companies will also believe that to be the case. There’s work to be done and the Government hasn’t given up trying to do its best to secure the movies. This is a very successful growth area for New Zealand and to have the film industry destroyed on the back of the actions of the unions is, I think, reprehensible.”

“I don’t think we should write off our chances of retaining the movies. Warner Brothers has already invested $100 million in The Hobbit movies so they have, historically at least, been of the view that New Zealand is a good place to make movies and it’s only the actions of the unions that encouraged them to start looking at other locations.”

The full interview is available at the news site of the New Zealand Herald.