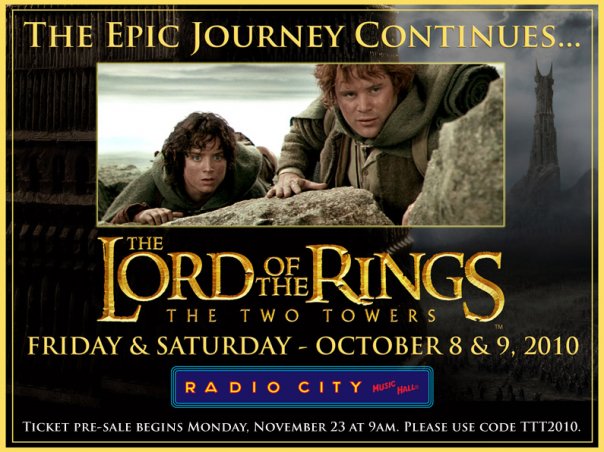 The music of Middle-earth will be brought to life by more than 300 musicians: Switzerland’s 21st Century Symphony Orchestra, The Grammy Award®-winning Brooklyn Youth Chorus, and renowned soprano Kaitlyn Lusk, all under the direction of celebrated Maestro Ludwig Wicki.

Last fall, over 10,000 people filled Radio City for The Fellowship of the Ring shows. The New York Times said “the music of Middle-earth soared at Radio City Music Hall,” while Entertainment Weekly said “it was a terrific night at the theater.”

Released on December 18, 2002 The Lord of the Rings: The Two Towers is the second installment in Peter Jackson’s fantasy adventure film trilogy based on J.R.R. Tolkien’s The Lord of the Rings. Set in Middle-earth, the story picks up with Frodo (Elijah Wood) and Sam (Sean Astin) trekking to Mordor to destroy the One Ring of Power while Gimli (John Rhys-Davies), Legolas (Orlando Bloom) and Aragorn (Viggo Mortensen) search for the orc-captured Merry (Dominic Monaghan) and Pippin (Billy Boyd). All along, nefarious wizard Saruman (Christopher Lee) awaits the Fellowship members at the Orthanc Tower in Isengard. Highly acclaimed by critics and fans alike, the film earned over $925 million worldwide, making it one of the highest grossing films of the year in the U.S. and worldwide. The film remains one of the top-10 highest-grossing worldwide films of all time. It won two Academy Awards®, a Grammy® Award and three BAFTAs, and was nominated for Best Picture at the Oscars®, Golden Globes®, and BAFTA Awards.

Howard Shore (Composer) is among today’s most respected, honored, and active composers and music conductors. His work with Peter Jackson on The Lord of the Rings trilogy stands as his most towering achievement to date, earning him three Academy Awards®. He has also been awarded four Grammys® and three Golden Globes. Shore was one of the original creators of Saturday Night Live where he served as the music director from 1975 to 1980. At the same time, he began collaborating with David Cronenberg, and has scored 12 of the director’s films, including The Fly, Dead Ringers, Crash, Naked Lunch and Eastern Promises for which he was honored with a Genie Award. Shore continues to distinguish himself with a wide range of projects, from Martin Scorsese’s The Departed, The Aviator, and Gangs of New York, to Ed Wood, The Silence of the Lambs, Philadelphia, and Mrs. Doubtfire. Shore’s music has been performed in concerts throughout the world. In 2003, Shore conducted the New Zealand Symphony Orchestra and Chorus in the world premiere of The Lord of the Rings Symphony in Wellington, New Zealand. Since then, the work has had over 140 performances by the world’s most prestigious orchestras. In 2008, Howard Shore’s opera of The Fly premiered at the Théâtre du Châtelet in Paris and at The Los Angeles Opera. Other recent works include Fanfare for the Wanamaker Organ in Philadelphia and a piano concerto in 2010 for Lang Lang. He is currently working on his second opera and looks forward to a return to Middle-earth with J.R.R. Tolkien’s The Hobbit. Shore received the Career Achievement for Music Composition Award from the National Board of Review of Motion Pictures and New York Chapter’s Recording Academy Honors, ASCAP’s Henry Mancini Award and the Frederick Loewe Award. He holds honorary doctorates from Berklee College of Music and York University and he is an Officer of the French Order of Arts and Letters.

Ludwig Wicki (Conductor) began his career as a member of the Lucerne Symphony and Opera Orchestra and founder of the San Marco Brass and the Philharmonic Brass Quintet. After studying choral conducting with the music director of the world-renowned Dresdner Kreuzchores in Germany, Wicki became a permanent member of the Schola Romanum Luzernsis under the direction of Pater Roman Bannwart. Wicki then went on to become the music director at the Palace Chapel of Lucerne where he led the choir in Georgian chants and performances of Bach, Handel, Monteverdi and Palestrina, as well as the orchestra in works by Haydn, Mozart, Beethoven, Schubert and more. He inaugurated a Renaissance ensemble, Il Dolcimelo, and created the concert series Treffpunkt Haydn. In 1999, he founded the 21st Century Symphony Orchestra, which has collaborated with internationally-renowned composers including Howard Shore, Randy Newman and Martin Böttcher. In 2007, the city of Lucerne presented Maestro Wicki with a Special Achievement Award for his contribution to the city’s cultural life.
Film music is the credo and passion of the Lucerne-based 21st Century Symphony Orchestra, led by Artistic Director Ludwig Wicki. The group has garnered wide acclaim for projects such as James Bond in Concert, Italian Film Music: An Hommage to Ennio Morricone and Maurice Jarre and An Evening with Randy Newman. In 2007, the 21st Century Symphony Orchestra entered into a partnership with Academy Award®-winner Howard Shore and has performed his complete score for The Lord of the Rings: The Fellowship of the Ring and The Lord of the Rings: The Two Towers. live to the epic motion picture. The project continues with the world premiere of The Lord of the Rings: The Return of The King in 2010.

The Grammy® Award-winning Brooklyn Youth Chorus, now in its 17th season, is one of the country’s leading children’s choruses. Led by founder and artistic director Dianne Berkun, BYC choristers study and perform a range of music in classical and non-classical genres. The Chorus has toured Austria, Russia, the United Kingdom, Canada and Germany; performed at venues including Carnegie Hall, Lincoln Center, Madison Square Garden and the White House; sung with major artists such as Elton John, Barbara Cook, Lou Reed, John Legend, Natasha Bedingfield, Fantasia Barrino, Ray Davies, Judy Collins, Andrea Bocelli, and Mark Morris Dance Group.
Kaitlyn Lusk made her major orchestral singing debut with the Baltimore Symphony in 2003 at the age of 14 and has since been sought after for solo appearances with many of the nation’s leading orchestras. Since the fall of 2004, Kaitlyn has been the featured vocal soloist in Howard Shore’s The Lord of the Rings Symphony. She has performed this role with over 25 orchestras in the United States and Canada from the Philadelphia Orchestra to the San Francisco Symphony, and from the Houston Symphony to the Minnesota Orchestra. She has performed with conductors including Keith Lockhart, Alexander Mickelthwate, Allaistar Willis, Stuart Malina, Nicolas Palmer, Markus Huber. In January 2007, Kaitlyn made her European debut with Maestro John Mauceri and the Gewandhaus Orchestra in Leipzig. In the summer of 2007, as part of an encore performance of The Lord of the Rings Symphony with the Cleveland Orchestra, she once again performed with Howard Shore, who in 2005 invited Kaitlyn to perform the Academy Award®-winning song as part of the Grammy® Honors of Howard Shore in New York City. In addition to her live performances, Kaitlyn’s first studio album, No Looking Back, features some of the top musicians and songwriters in the industry today and was produced by the award-winning composer and arranger, Kim Scharnberg.

This event is presented by CAMI Music and New York Comic Con in association with TheOneRing.Net. Swiss International Air Lines is the official sponsor.