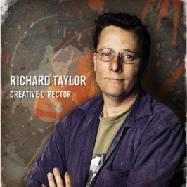 Although actors like Viggo Mortensen, Ian McKellen and Elijah Wood, not to mention writer-director Peter Jackson and producer Fran Walsh are often credited with the success of the Lord of the Rings trilogy, the real folks responsible for bringing them to life are the crew members behind the scenes, led by Weta workshop president Richard Taylor.  Since the beginning of the film series, Taylor has provided vital, insightful information about the making of the films, and helped flesh out their journey from page to screen.

This week, Warner Home Video released the theatrical versions of the Lord of the Rings trilogy on Blu-ray. The good folks at WHV offered Hollywood News an opportunity to talk with Taylor about the process of blowing up the films to Blu-ray, and they caught up with him late last week while driving to San Francisco for Wondercon.  Although Taylor admitted outright that he hadn’t seen the new discs and had little to do with the high-definition remastering, the effects guru spoke about his interest in the films as new iterations arrive in fans’ hands, and then offered a few brief details about his upcoming work on The Hobbit, which is among Hollywood’s most highly-anticipated future films.  More.