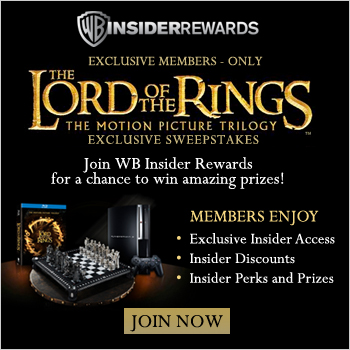 Named one of the best films in the last 25 years by USA Today, The Lord of the Rings: The Motion Picture Trilogy is coming to Blu-ray™ for the first time ever. Join WB Insider Rewards for a chance to win the Blu-ray edition of the trilogy, a Sony Playstation®3 with built in Blu-ray player and highly prized collectibles. The Grand Prize includes a chess set by The Noble Collection with an ancient map of Middle-earth mounted beneath the playing surface and a base with actual images of the memorable characters and scenes from the thrilling motion picture trilogy. Join for a chance to win!