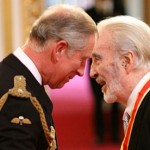 All of us at TheOneRing.net would like to offer our warmest congratulations to *Sir* Chrstopher Lee for this well-deserved honor!

Finding oneself opposite a tall, baleful celluloid vampire would have most people reaching for a head of the most pungent Spanish garlic, a large crucifix or a sharp stake. The Prince of Wales, however, opted for a ceremonial sword, even as the 1.95-metre (6ft 5ins) vision of Count Dracula leaned worryingly close to the royal neck. Fortunately, the prince had little to fear. Christopher Lee – aka Counts Dracula and Dooku, not to mention Lord Summerisle and the Duc de Richleau – had been invited to Buckingham Palace today to receive a knighthood for his services to drama and to charity. The 87-year-old is one of cinema’s most prolific actors, appearing in more than 250 films over the course of a career that has so far spanned 61 years. More..