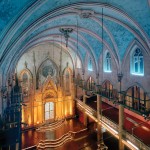 For those of you who weren’t able to attend the Sunday Radio City events in NYC, message board member greendragon sends in this wonderful recap of the presentations that rounded out weekend. Having been lucky enought to attend, I would be remiss if I didn’t add to her report that her beautiful singing as part of the first presentation: The Music of The Hobbit, enchanted us all and, as our mistress of ceremonies, she was gracious and entertaining. Thanks, greendragon!

From greendragon: By now you’ve probably read many reports about the fabulous weekend in New York City, when many Tolkien fans gathered together to hear Howard Shore’s music played in Radio City Music Hall, with The Fellowship of the Ring projected on a huge screen behind.  The culmination of this magical weekend, on Sunday 11th October, was a day of presentations on Tolkien, the movies and the music.  We were fortunate, on a sunny Sunday in Manhattan, to be heading for a spectacular venue.  Angel Orensanz Foundation for the Arts maintains an amazing building on Norfolk St, which they had generously donated for our use that day.  This former synagogue is absolutely beautiful – you can read more about the venue here:

The good folks from Angel Orensanz Foundation prepared for our arrival by lighting tealight candles in wrought iron chandeliers, and in this magical atmosphere – and hosted by TORn’s own greendragon (aka me!) –  we indulged in all things Middle Earth! The first presentation was by Corey Olsen, ‘The Tolkien Professor’. Mr. Olsen gave a talk about music in The Hobbit.  He explained how song is an enchantment which serves to draw us – and Bilbo! – into the realm of magic and adventure.  His clearly spoken, intelligent and very well put arguments really made me think again about those ‘Tra-la-la-lallys’ and their importance in The Hobbit.  I was honoured to be a small part of his presentation as I performed the moment when the dwarves begin to sing ‘Far over the misty mountains cold…’

Having got things going with style, Mr Olsen was followed by Colleen Doran, who gave a wonderful presentation about Tolkien’s art, his own influences, and the art of those who have interpreted Middle Earth.  She modestly focused largely on the work of others – though we all agreed we would gladly have spent more time looking at her own gorgeous drawings – and her talk was accompanied by images for us all to gaze upon and enjoy!  She also brought prints of her ‘Gimli’s Gift’ drawing, for us all to take home with us.

A brief break, and David Salo took the stage to tell us about his work on the movies.  He worked on all three films – and, we hope, will continue his work on The Hobbit! – as linguist and translator.  His knowledge of Tolkien’s languages is amazing, and his anecdotes about the texts he created for Peter Jackson’s films (and the sometimes VERY short time periods he had to do them!) kept us all entertained.  It was marvellous to hear him declaim in the various tongues of Middle Earth.

We were then treated to an exclusive movie.  This was Elizabeth Cotnoir’s ‘Journey’s End’, a documentary about her husband Howard Shore’s work on the Lord of the Rings films, and in particular on The Return of the King.  Whilst some clips from this film have been seen before, I believe this was the first time the entire movie had been shown anywhere, and it was a joy to have Ms Cotnoir there to introduce it.  She told us she had promised her husband that there would be only ‘one bathrobe shot’ in the film – but she managed to sneak in two!  It was fascinating to see artists as diverse as Annie Lennox, Sir James Galway and Renee Fleming working with Mr Shore and exploring his compositions. 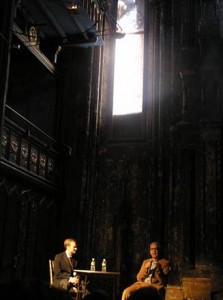 And still there was more to come!  Our last treat of the day was Doug Adams and Howard Shore taking to the stage to discuss the music of the movies, and Doug Adams’ forthcoming book on that subject.  What a couple of gentlemen they are!  Their discussion was insightful and informative, whilst seeming intimate and informal.  Mr. Shore talked about how he has rearranged and revoiced much of the movie scores for these orchestral performances, and how he is still taking notes and ‘tweaking’ things all the time.  He told us that opera has been a big influence on his writing, and that he has already spoken to Guillermo del Toro – and seen his notebooks – about The Hobbit!  He and Doug Adams clearly have a strong friendship as well as an excellent working relationship, and their relaxed and fascinating ‘chat’ further whetted my appetite for Mr Adams’ book – which they hope will be released next April sometime.

Mythology Body had donated some deliciously fragrant, handmade soaps for the event, so no one went home empty handed!  After thanks to CAMI, TheOneRing.net and the venue, we all spilled out into the bright afternoon, to reflect on what we had heard and the splendid time we had had indulging in our favourite pastime – the study and consideration of J. R. R. Tolkien and his works.  We hope to repeat this event next year, when The Two Towers will be shown at Radio City, so we hope that more fans will be able to join us then.  Mark your diaries now!  Many thanks again to all who made this thought-provoking and delightful day possible.