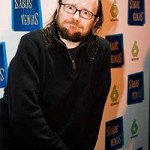 Mauro writes: I was listening to a Basta de Todo interview with the great Spanish actor/comedian/writer Santiago Segura, who performed in many movies and is a personal friend of both Guillermo del Toro and Alex de la Iglesia, featured in a lot of movies of both filmmakers. He performed starring roles in Spanish released titles of both of them and he did several cameo roles on the Hollywood movies of Alex and Guillermo (Hellboy, Perdita Durango, Blade II, etc). He’s sort of a fetish actor for both, he mentioned he’s traveling next week to New Zealand to “visit” his friend Guillermo, (he jokingly said “I’m going down there to beg him for a role on The Hobbit”). The interviewers and Santiago even hinted that the chance of a role is pretty much secure. Santiago Segura imdb