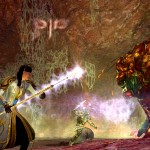 Today, Turbine has released Volume II, Book 8: Scourge of Khazad-dum, the latest major content update for subscribers of The Lord of the Rings Online: Mines of Moria (LOTRO). Book 8, which is now available to North American subscribers (available in Europe on 6/25), delivers the next installment to the epic story for Volume II of LOTRO, a new 12-player raid, several rich new instances for small fellowships, major gameplay enhancements, and the Summer Festival. An official press release follows. Turbine has also just released a new Book 8 teaser video and batch of screenshots.

TURBINE RELEASES VOLUME ii, bOOK 8: SCOURGE OF KHAZAD-DÛM
Next Major Update Goes Live for Subscribers of The Lord of the Rings Online™

WESTWOOD, MA – June 23, 2009 – Turbine, Inc. announced the details of the latest major update for subscribers of The Lord of the Rings Online™: Mines of Moria™ (LOTRO). LOTRO’s second anniversary celebration continues with the release of Book 8: Scourge of Khazad-dûm, the latest of Turbine’s frequent and substantial updates to the Best MMORPG of 2008*. Book 8 delivers the next installment to the epic story for Volume II of LOTRO, a new 12-player raid, several rich new instances for small fellowships, major gameplay enhancements, and the Summer Festival. Book 8: Scourge of Khazad-dûm is available to subscribers of The Lord of the Rings Online starting today in North America and on June 25, 2009 in Europe.
“2009 continues to be an outstanding year for LOTRO as we’re seeing solid growth in the population of Middle-earth,” said Jeffrey Steefel, Executive Producer of The Lord of the Rings Online. “We’re continuing our huge Anniversary celebration with the launch of Book 8 which continues our enhancements to the player experience while delivering exciting new adventures for our players. There has never been a better time to play LOTRO!”

The Epic Journey Continues R11; The latest update to Volume II, Book 8 will take LOTRO’s award-winning storytelling to a new level as the evil designs of Gorothúl, sorcerer of Dol Guldur, begin to be made clear as ancient evils stir again in the depths of Khazad-dûm. Small Fellowships must form to combat this emerging threat before the hopes of the Iron Garrison and the Elves of Lothlórien are darkened by new forces of evil. The epic story of the Mines of Moria continues with new adventures and challenges!

New 12-player Raid – Book 8 introduces Dâr Narbugud, a new quest arc that begins deep within Moria where nameless things have long dwelt, further darkening the shadowy depths. With the death of Durin’s Bane, these creatures have become bolder, and the Mistress of Pestilence seeks to spread her plague to the world of light.

Celebrate the Summer Festival! – The Summer Festival returns to Middle-earth from June 30, 2009 to July 14, 2009. The world will come together in celebration as the free people of Middle-earth enjoy the season with special decorations, festive costumes and special quests including the return of the Inn League challenge!
LOTRO’s Second Anniversary Celebration continues:

Anniversary Pricing Plans: Turbine is offering special anniversary pricing until June 30th. Players can choose any multi-month plan (90 days or longer) and lock in a monthly price of $9.99 for as long as they maintain the new subscription plan.**

• During the anniversary celebration, monsters throughout Middle-earth will drop rare items when defeated. Players can exchange these rare items for a special gift box that will reward them with a variety of in-game items to aid them in their adventures.

• Turbine is also giving players who have active subscriptions as of June 30th a special in-game gift—the Writ of Passage, which provides permanent 20% discounts at stable masters throughout Middle-earth.

The Lord of the Rings Online is the ultimate interactive adventure. This award-winning massively multiplayer online role-playing game delivers an interactive experience brimming with life and filled with the familiar people, places and monsters from the most beloved fantasy of all time. >From the picturesque surroundings of the Shire to Moria, the most fearsome underground realm ever imagined, players will experience the world of Middle-earth as never before. The Lord of the Rings Online: Mines of Moria Complete Edition, which includes the original game, The Lord of the Rings Online™: Shadows of Angmar™ (Volume I), all content updates released since launch, and Mines of Moria (Volume II) is now available for purchase at major retailers across North America. For more information or to download a free trial, visit www.lotro.com.

Turbine, Inc. is a premier creator, operator and publisher of massive, persistent online worlds that foster powerful social gaming communities. Turbine is the largest privately-held online gaming studios in North America and was recently chosen by AlwaysOn as one of the OnHollywood 100 Top Private Companies, a power list of the top private emerging technology companies in digital entertainment and media. The company has created some of the world’s most popular and award-winning online games, including The Lord of the Rings Online™, Dungeons & Dragons Online™ and Asheron’s Call®. For more information on Turbine, its products and services please visit www.turbine.com.

Codemasters is a leading developer and publisher of best-selling interactive entertainment products for a global audience on current and future gaming platforms and channels. Established in 1986, the company’s dominant brands include Colin McRae Rally, TOCA Race Driver, LMA Manager, Brian Lara Cricket and Operation Flashpoint. The company is headquartered in Southam, Warwickshire UK and maintains operations in the US, Germany, France, Spain, and Benelux. More information about the company and its products is available online at www.codemasters.com.

The Saul Zaentz Company d/b/a Tolkien Enterprises is the holder of worldwide motion picture, legitimate stage, merchandising, and other rights in J.R.R. Tolkien’s literary works The Lord of the Rings and The Hobbit. Tolkien Enterprises has been producing and licensing films, stage productions and merchandise based on Tolkien’s works for more than 30 years. Its headquarters are in Berkeley, California, and its website may be found at www.tolkien-ent.com.