“My friend and I went down to the Borders in Westwood in Los Angeles for GDT’s book signing of The Strain. While there were perhaps 20 people around 5PM when the venue opened, by 7PM there were well over 100 people (including some that looked to be from a local news agency). He was slightly delayed because he was giving an interview with a certain website Wink While we waited we bumped into Garfeimao (TORn staffer) it was great to see her again.

When GDT came in, there was quite a bit of cheering and clapping. He had a discussion before the book signings- I did not get exact quotations, but I’ll summarize it to the best of my memory. He did explain that there were two different types of vampires- the romantic kind and then the not-so-romantic, violent kind. The vampires in The Strain are the latter. He also explained- I hope I remember this correctly- that the Strain is a part of a trilogy, with the first part being about the more biological stuff about vampires, the second book covering the mythology, and the third (and his favorite theme, IIRC) covering the spirituality. When it came to biology, he did make it clear that we would discover many, many details about vampires- including something about their pee. Laugh When it came to the mythology (and perhaps spirituality, my mind is a bit foggy), he mentioned that they are going a bit of a different route, and not taking the classic route- giving us a new way to think about vampire’s mythology.

When it came to his influences he mentioned short stories; unfortunately I cannot remember the name, but it’s apparently terrifying. He certainly made a reference to Bram Stoker’s Dracula, though I remember him putting more emphasis on an earlier work- perhaps Vampyre by John Polidori. There was also a mention of “I Am Legend” by Richard Matheson. A little fun fact: when an audience member asked him about stories his grandmother had told him, apparently she (who was a devout Catholic) mostly told stories concerning original sin and purgatory to young GDT. He also talked about the 4 starring characters of The Strain, but I’ll leave you folks to discover who they are. Let’s just say that they are not exactly the most elite team of fighters on the earth. Laugh

I wish I could emulate GDT’s tone as he spoke- it was obvious that he was comfortable and definitely into the discussion about his book, especially concerning vampires. He was very funny at moments and a clear, engaging speaker. The speech itself was relatively short- no longer than 15 to 20 minutes if I had to take a guess. After a couple audience questions we went to the signing, where he talked individually to everyone there and drew a little caricature of himself in every book saying the book owner’s name. Kudos to Borders for making the process very efficient with the sticky notes already having our name written down so he didn’t have to ask.

As for the book itself? It looks to be a thriller/mystery/horror. I am 50 pages in and already very curious as to see where it goes. The beginning starts off with something like a prologue (it is a legend that I imagine will have some significance later in the book). It goes on to bluntly tell of the final recording of flight 753… and, well, from there the story continues. I cannot wait to see what it reveals.

I’ll end this post with the final photo of the evening.

Thanks to Borders and GDT for hosting such a magnificent event! I hope to be there again for the release of the second book of the trilogy!” 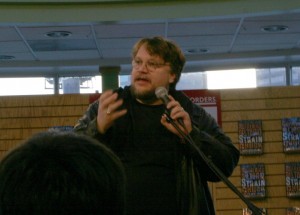 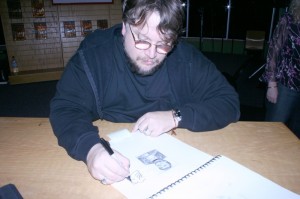 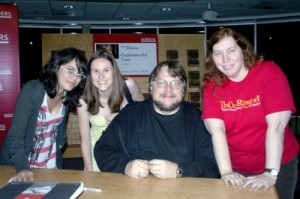