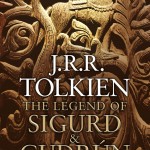 The folks from Houghton Mifflin Harcourt send this bit of coolness to us! They want to whet your appetites for the May 5th release of ‘The Legend of Sigurd and Gudrún’, take a look at the foreword written by Christopher Tolkien!

Pre-order ‘The Legend of Sigurd and Gudrún’ on Amazon.com

In his essay On Fairy-Stories (1947) my father wrote of books that he read in his childhood, and in the course of this he said:

I had very little desire to look for buried treasure or fight pirates, and Treasure Island left me cool. Red Indians were better: there were bows and arrows (I had and have a wholly unsatisfied desire to shoot well with a bow), and strange languages, and glimpses of an archaic mode of life, and above all, forests in such stories. But the land of Merlin and Arthur were better than these, and best of all the nameless North of Sigurd and the Völsungs, and the prince of all dragons. Such lands were pre-eminently desirable.

That the ancient poetry in the Old Norse language known by the names of the Elder Edda or the Poetic Edda remained a deep if submerged force in his later life’s work is no doubt recognized. It is at any rate well-known that he derived the names of the dwarves in The Hobbit from the first of the poems in the Edda, the Völuspá, ‘the Prophecy of the Sibyl’ – remarking in a lightly sardonic but not uncharacteristic tone to a friend in December 1937:

I don’t much approve of The Hobbit myself, preferring my own mythology (which is just touched on) with its consistent nomenclature . . . to this rabble of Eddaic-named dwarves out of Völuspá, newfangled hobbits and gollums (invented in an idle hour) and Anglo-Saxon runes.

But it is certainly not well-known, indeed scarcely known at all (though it can be discovered from existing publications), that he wrote two closely associated poems treating of the Völsung and Niflung (or Nibelung) legend, using modern English fitted to the Old Norse metre, amounting to more than five hundred stanzas: poems that have never been published until now, nor has any line been quoted from them. These poems bear the titles Völsungakviða en nýja, the New Lay of the Völsungs, and Guðrúnarkviða en nýja, the New Lay of Gudrún.

My father’s erudition was by no means confined to ‘Anglo-Saxon’, but extended to an expert knowledge of the poems of the Elder Edda and the Old Norse language (a term that in general use is largely equivalent to Old Icelandic, since by far the greater part of Norse literature that survives is written in Icelandic). In fact, for many years after he became the professor of Anglo-Saxon at Oxford in 1925 he was the professor of Old Norse, though no such title existed; he gave lectures and classes on Norse language and literature in every year from 1926 until at least 1939. But despite his accomplishment in this field, which was recognized in Iceland, he never wrote anything specifically on a Norse subject for publication – except perhaps the ‘New Lays’, and for this, so far as I know, there is no evidence one way or the other, unless the existence of an amanuensis typescript, of unknown date and without other interest, suggests it. But there survive many pages of notes and draftings for his lectures, although these were for the most part written very rapidly and often on the brink of illegibility or beyond.

The ‘New Lays’ arose from those studies and belong to that time. My inclination is to date them later rather than earlier in his years at Oxford before the Second War, perhaps to the earlier 1930s; but this is scarcely more than an unarguable intuition. The two poems, which I believe to have been closely related in time of composition, constitute a very substantial work, and it seems possible, as a mere guess, since there is no evidence whatsoever to confirm it, that my father turned to the Norse poems as a new poetic enterprise after he abandoned the Lay of Leithian (the legend of Beren and Lúthien) near the end of 1931 (The Lays of Beleriand, p.304).

These poems stand in a complex relation to their ancient sources; they are in no sense translations. Those sources themselves, various in their nature, present obscurities, contradictions, and enigmas: and the existence of these problems underlay my father’s avowed purpose in writing the ‘New Lays’.

He scarcely ever (to my knowledge) referred to them. For my part, I cannot recollect any conversation with him on the subject until very near the end of his life, when he spoke of them to me, and tried unsuccessfully to find them. But he briefly mentioned the work in two letters to W.H. Auden. In that of 29 March 1967 (The Letters of J.R.R. Tolkien, edited by Humphrey Carpenter, no.295), thanking Auden for sending his translation of the Völuspá, he said that he hoped to send him in return ‘if I can lay my hands on it (I hope it isn’t lost), a thing I did many years ago when trying to learn the art of writing alliterative poetry: an attempt to unify the lays about the Völsungs from the Elder Edda, written in the old eight-line fornyrðislag stanza’ (that being the name given to the Norse alliterative stanzaic metre used in the greater number of the ‘Eddaic’ poems, the ‘Old Lore Metre’). And in the following year, on 29 January 1968, he wrote: ‘I believe I have lying about somewhere a long unpublished poem called Völsungakviða en nýja written in fornyrðislag 8-line stanzas in English: an attempt to organize the Edda material dealing with Sigurd and Gunnar.’

To ‘unify’, to ‘organize’, the material of the lays of the Elder Edda: that was how he put it some forty years later. To speak only of Völsungakviða en nýja, his poem, as narrative, is essentially an ordering and clarification, a bringing out of comprehensible design or structure. But always to be borne in mind are these words of his: ‘The people who wrote each of these poems [of the Edda] – not the collectors who copied and excerpted them later – wrote them as distinct individual things to be heard isolated with only the general knowledge of the story in mind.’

It may be said, as it seems to me, that he presented his interpretation of the sources in a mode that can be received independently of the doubts and debates of ‘Eddaic’ and ‘Nibelung’ scholarship. The ‘New Lays’ themselves, elaborate poems closely modelled in manner as in metre on the ‘Eddaic’ lays, are therefore paramount; and they are presented here in plain texts without any editorial interference; all else in the book is ancillary.

That there should be, nonetheless, so much else in the book requires some explanation. It may be felt that some account should be given of the actual nature of my father’s distinctive treatment of the legend. To provide a comprehensive account of the much discussed problems that he sought to resolve would lead all too easily to the first appearance of the ‘New Lays’ after some eighty years with a great weight of scholarly discussion hung about their necks. This is not to be thought of. But it seems to me that the publication of his poems provides an opportunity to hear the author himself, through the medium of the notes with which he prepared for his lectures, speaking (as it were) in characteristic tones on those very elements of doubt and difficulty that are found in the old narratives.

It must also be said that his poems are not at all points easy to follow, and this arises especially from the nature of the old poems that were his models. In one of his lectures he said: ‘In Old English breadth, fullness, reflection, elegiac effect, were aimed at. Old Norse poetry aims at seizing a situation, striking a blow that will be remembered, illuminating a moment with a flash of lightning – and tends to concision, weighty packing of the language in sense and form . . .’ That ‘seizing a situation’, ‘illuminating a moment’, without clear unfolding of narrative sequence or other matters with a bearing on the ‘moment’, will be found to be a marked characteristic of the ‘New Lays’; and here some guidance may be looked for in addition to the brief prose statements that he added to some of the sections of the Völsungakviða en nýja.

After much deliberation I have therefore provided, at the end of each poem, a commentary, which is intended to clarify references, and passages that may seem obscure; and also to point out significant departures made by my father from the Old Norse sources or between variant narratives, in such cases indicating his views, where possible, by reference to what he said in his lectures. It must be emphasized that nothing in those notes suggests that he had written, or had it in mind to write, poems on the subject himself; on the other hand, as one might expect, congruence between the views expressed in his lecture notes and the treatment of the Norse sources in his poems can often be observed.

As a general introduction in this book to the Elder Edda I have cited at length a more finished lecture with that title; and following this I have contributed brief statements on the text of the poems, the verse-form, and some other topics. At the end of the book I have given a brief account of the origins of the legend and cited some other related verses of my father’s.

In thus making much use of my father’s notes and draft discussions on ‘the Matter of Old Norse’, and the tragedy of the Völsungs and the Niflungs, hastily set down and unfinished as they are, I have chosen to try to make this book, as a whole, as much his work as I could achieve. Of its nature it is not to be judged by views prevailing in contemporary scholarship. It is intended rather as a presentation and record of his perceptions, in his own day, of a literature that he greatly admired.

Copyright © 2009
All rights reserved. No part of this publication may be reproduced or transmitted in any form or by any means, electronic or mechanical, including photocopy, recording, or any information storage and retrieval system, without permission in writing from the publisher.

Requests for permission to make copies of any part of the work should be submitted online at www.harcourt.com/contact or mailed to the following address: Permissions Department, Houghton Mifflin Harcourt Publishing Company, 6277 Sea Harbor Drive, Orlando, Florida 32887-6777.

Pre-order ‘The Legend of Sigurd and Gudrún’ on Amazon.com