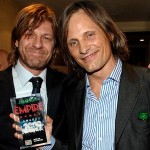 At this year’s Jameson Empire Awards, the winner of the “Empire Icon” award was kingly indeed. Viggo Mortensen was presented the award by non other than Boromir (Sean Bean) whom also became part of Viggo’s acceptance speech:

“Let’s talk about Sean Bean. Empire magazine was an early and ardent supporter of Lord of the Rings before it even came out. Now as far as I know we’re not in The Hobbit but they’re going to try and find a way, just for fun. I’m not necessarily against the idea. They may try to link that book to the book we were in. But I was looking at Tolkien’s version of the world. In order to do a prequel to The Lord of the Rings, I’d probably have to be changing Boromir’s diapers because I live longer or whatever. “

You can see a video of the acceptance speech as well as read it on Empire Online.