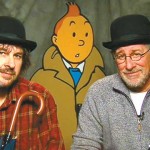 Everyone knows Hollywood giants Peter Jackson and Steven Spielberg are collaborating on three Tintin movies, but rarely has the public seen the two top film-makers in the same place. A new online video shows them not only together, but with the potential to be a snappy comic duo. The official website for Tintin unveiled this week a two-minute video recording of Jackson and Spielberg made for the the Angouleme International Comics Festival in France. In the video Jackson and Spielberg wear bowler hats and carry umbrellas as a homage to two of the Tintin series’ most popular characters, the bungling detectives Thomson and Thompson. They are seated between a cardboard cutout of Tintin, the plucky Belgian detective. “We’re here to celebrate Tintin’s 80th year in existence,” said Spielberg, who is directing the first Tintin film Secret of the Unicorn. Tintin video unveiled Video