Christopher Lee on Saruman and The Hobbit 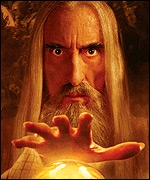 Message board member diedye found this IGN interview in which Christopher Lee discusses his role as a Bond baddie in “Man with the Golden Gun,” and speculates about reprising the role of Saruman in the upcoming Hobbit films. This part, in particular, sounds promising:

“IGN: Would you be willing to reprise the role?
Lee: In the spirit very much so. But I’ve reached an age now [86] where going to New Zealand again would be a very considerable effort. It would not be easy because it’s an exhausting journey. Even with a break I’m not sure I could do it.
IGN: If they could film your part in London, would you be interested?
Lee: Oh yes, of course. I’d be delighted.”

Source: IGN.com Christopher Lee on Saruman and The Hobbit | Discuss