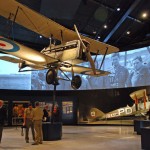 World War I aerial history is being brought to life with the display of rare aircraft and a dramatic short film at the Australian War Memorial in Canberra. A 12 minute film by Oscar winning director Peter Jackson then captures the warbirds and pilots in action over the Western Front. Curator Peter Burness says the exhibition tells the story of military flight and aerial combat during the Great War. “Clearly there was a story to tell about aviation in the First War from its very simple forms – almost kite-like machines – at the beginning of the war to the technology they’d introduced by 1918,” he said. WWI aerial action brought to life