The Cruise to Middle-earth made its way to Hobbiton the other day, hampered by some rain and a terrible crash on the road, but we made it nonetheless. For the three Brandybuck sisters, this was like returning home for them. The location is still just as beautiful and Shire like as it was in the films, while also remaining a working sheep farm. We encountered a good many sheep and lambs, and the things they leave behind. But no one really cared, not once they saw the Party Tree and Bag End. 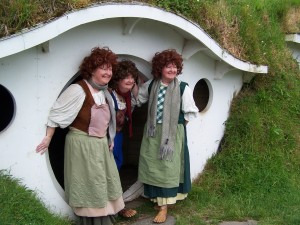 The next day was a Day at Sea, so we had a party, like any good Hobbit would, and much merriment was had. We had Ents and Elves, Hobbits and a Shieldmaiden and even a Gondorian Guard of the Citadel in our young Pippin. And what is amazing is that the Hobbits were very much hobbit sized and our Elves were every bit Elven, as seen in the photos. After a little mix up with the snacks for the party, everyone was properly fed and given libation and the mingling lasted a good long while. 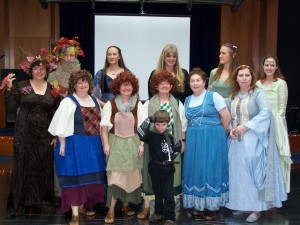 I’m writing this from an internet café in Wellington where we are just about to embark on our private tour of WETA. I’m hoping we can glean some little tidbits about upcoming projects, including one near and dear to all our hearts. I’ll post a follow up if there is anything of note to share, and if there isn’t, I’ll post anyhow because I’m sure the visit will be wonderful regardless.

Quick update, just got back from the tour of WETA, and while there isn’t a lot we are allowed to say, we did get permission to say that Guillermo Del Toro stopped in to say hello. But since that just happened, there are no pictures uploaded yet. Will rectify that soon. We were treated to talks by Richard Taylor, Daniel Falconer and Gino Acevedo, and again, pictures will be forthcoming. By for now, I’ve got a 70’s disco show to go to.