Ringer Diedye brings us another great FLASHBACK! This week’s flashback details the events that took place in the Tolkien universe between August 17th-23rd. This is a weekly feature that Diedye posts in the forum, so if there is ever a time we don’t post it on the homepage of TORn, make sure to check the Main board in our forums. Click on the link below to transported in time!
August 17 to August 23

1947
August 20 – Famed British fantasy artist Alan Lee, who also worked as a conceptual designer on Peter Jackson’s LOTR, is born on this day.

1953
August 17 – In a follow-up letter (#140) to a visit by Rayner Unwin to Sandfield Road, Tolkien offers some new suggestions for titles for all three LOTR books…

The Fellowship of the Ring will do, I think; and fits well with the fact that the last chapter of the Volume is The Breaking of the Fellowship. The Two Towers gets as near as possible to finding a title to cover the widely divergent Books 3 and 4; and can be left ambiguous – it might refer to Isengard and Barad-dûr, or to Minas Tirith and B; or Isengard and Cirith Ungol. On reflection I prefer for Vol. III The War of the Ring, since it gets in the Ring again; and also is more non-committal, and gives less hint about the turn of the story : the chapter titles have been chosen also to give away as little as possible in advance. But I am not set in my choice.

August 19 – Rayner Unwin replies to Tolkien’s letter, agreeing with his choice of book titles for LOTR, except for the third one, which he prefers to be titled “The Return of the King”.

1957
August 21 – Canadian fantasy artist John Howe, who also worked as a conceptual designer on Peter Jackson’s LOTR, is born on this day.

1966
August 19 – In a letter to Tolkien regarding an upcoming visit, Rayner Unwin mentions Tolkien’s latest physical challenge, namely a muscular spasm for which his doctor has prescribed a cervical collar, which Rayner hopes “is not proving too burdensome” (HarperCollins archive).

1968
August 21 – After having a forced hiatus from writing imposed upon him due to his recent leg injury, Tolkien expresses his anxiousness in a letter to Stanley Unwin: “I am beginning to feel that the forcible damming up of the stream may soon release a good head of water to set the wheels turning again – as soon as I have anywhere to write in peace.” (HarperCollins archives)

1999
August 19 – Scoop gets the rumor mill going with the possibility of Liv Tyler being considered for a role in LOTR.

August 20 – In the latest entry of his Grey Book, Sir Ian McKellen reveals what motivates him to take the parts he does, his thoughts on taking on the role of Gandalf in a venture that will take him away from his London home for one year and his faith in Peter Jackson’s ability to bring the LOTR to life on the big screen.

August 21 – Michael Deluca denies rumors that Liv Tyler has been cast in LOTR.

August 22 – A rather dubious spy report “reveals” that Simon Tolkien, the estranged son of Christopher, is in talks with Peter Jackson and New Line for a role in the LOTR trilogy. Although this same spy report confirms the casting of Sir Ian McKellen, the unexpected mention of Ben Affleck raises more than a few eyebrows.

2000
August 22 – That “spikey wheel” pics has conjured up a slew of theories as to what it could be.

• The New Zealand Press prints a couple of pics of the Edoras set. 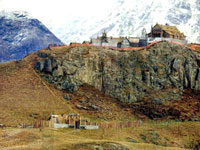 • Sir Ian McKellen answers some more LOTR questions on his E-post page, including how he deals with Gandalf’s fake wigs and facial hair, who actually was on Shadowfax in the spy pictures of Gandalf at the flooded Isengard set, how the rescue of Gandalf by Gwaihir will be shown, whether the Elvish dialogue will be subtitled and if the world will get to see Gandalf’s knees. He also reveals that the official LOTR photographs are being shot by Pierre Vinet, a Montrealer.

August 23 – Stuff.co.nz reveals that WETA has bought 16 shiny new SGI servers to help with the rendering of the LOTR trilogy.

2001
August 21 – A production insider reports that, from what sources have told him and photos he has seen, Bilbo will not be in the “Council of Elrond” scene. It is also noted that, oddly enough, there is no chair next to Gandalf when Frodo brings forth the One Ring.

Another movie mistake or will Frodo not be present for the rest of the Council scene?

August 23 – A TORn spy sends along some pics of costume accessories that will supposedly be worn by the Nazgul in the LOTR films. 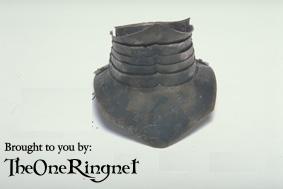 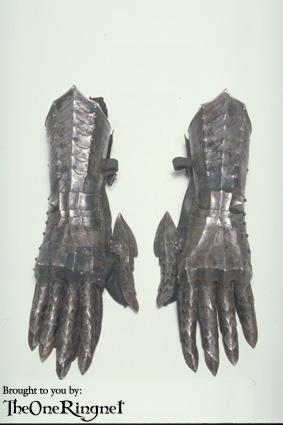 2004
August 17 – Elrond presents a shoddily reforged sword to Aragorn in John Cook’s newest installment of Fraud of the Rings.

August 19 – Saul Zaentz, the movie & music mogul who holds the movie rights to The Lord of the Rings, sues New Line Cinema for more than $20 million in unpaid royalties.