This week’s LOTR movie news is kinda sparse, so I thought I’d add in some Tolkien stuff. I tried to concentrate on mostly on things related to LOTR, with a smattering of some personal (but public) info on Tolkien & family. 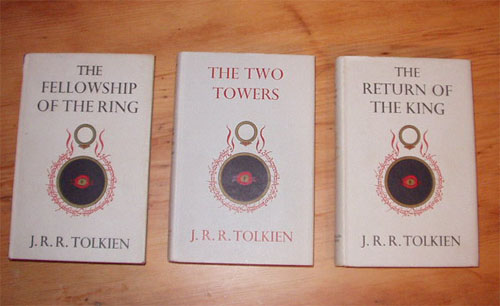 These were the final designs for all three volumes of LOTR…

1954 – Tolkien’s letter to W.N. Beard of Allen & Unwin (#147) – feedback of an advanced copy of FOTR that Beard sent him with a proof of the revised dust-jacket printed on grey paper, along with proofs of the dust-jackets of TTT & ROTK. “It was a great moment yesterday when I received the advance copy of The Fellowship of the Ring. The book itself is very presentable indeed.” He does, however, feel that there is a need to differentiate between the three books, since “the same device, is, for economy, used throughout, they do look too much alike” and suggests that the larger letters vary in color: “Title and author in red?”

He also points out two errors in the text on the lower jacket.
1967 – While recording Poems and Songs of Middle Earth (sic), Tolkien discovers an error in “The Sea-Bell” from The Adventures of Tom Bombadil. (Note: only eight out of 16 poems of “Tom Bombadil” have so far been released.) Of the experience, Tolkien wrote to Donald Swann: “Personally, I rather enjoyed the recording as the two men, Blackler and the machine operator, were helpful and appreciate” (Marion E. Wade Center).

June 16
1958 – Letter to Rayner Unwin (HarperCollins archive) – returns a storyline written by Morton Grady Zimmerman for an animated film of LOTR, to be forwarded, along with a cover letter, to Forrest J. Ackerman. Although the storyline is riddled with scathing annotations by Tolkien, he states that he does not want to “kill the project, which I think promised well on the pictorial side; but there is a limit to one’s endurance. I fear that close study of “Z” (Zimmerman) cause me to think that he is probably not a person of sufficient competence in this line to do a tolerable job.”
1966 – After Tolkien is consulted about a request by Jack Beale of the BBC to broadcast a radio adaptation of The Hobbit in eight 30-min. episodes, Stanley Unwin signs a contract for the dramatization, to take place within a year’s time.
2000 -Sir Ian McKellen E-posts his answers to fans’ questions, such as his choice for Gandalf had he himself not been chosen (the late Paul Scofield), explains the tricks behind on-screen sword-fighting, and gets a wee bit ornery when asked about a rumor that a “spy” heard a woman screaming at the doors of Moria, suggesting that Arwen was accompanying the Fellowship (‘The “spy” is incompetent if he/she ever existed. There were no women at the doors of Moria and no screaming. And to put an end to it – Arwen does NOT accompany the Fellowship in the movie.’)
2002 – a TORn spy report about filming at Ruapehu shows the LOTR trying to melt the ice in a stream so that they can shoot a TT scene with Andy, Elijah and Sean A.

June 17
1957 – Rayner Unwin’s letter to Tolkien (HarperCollins archive) -informs Tolkien that Al Brodax, an American film-maker, has written him about the possibility of making an animated film of LOTR. Rayner’s opinion is that, although the movie would be “almost inevitably tasteless and a travesty of the book”, there could be “big money” involved. Tolkien’s reply two days later (Letter #198): “As far as I am concerned personally, I should welcome the idea of an animated motion picture, with all the risk of vulgarization; and that quite apart from the glint of money, though on the brink of retirement that is not an unpleasant possibility. I think I should find vulgarization less painful than the sillification achieved by the B.B.C.” (I wonder how he would have felt about the Bakshi and Rankin/Bass versions…). He expresses an interest in learning more about the project and even suggests that, if and/or when he goes to New York in August, he may be able to meet Brodax.
1966 – Allen & Unwin write to Houghton Mifflin, informing them that Tolkien is completing his revision of ROTK.
1968 – Tolkien falls at his home in Sandfield Road, injuring his leg, resulting in an operation and a month’s stay in hospital. Because of this, he is unable to participate in the move to his new home in Poole. He later describes the experience in a letter to his son, Michael: “I was picked up off the floor of the hall and transported to the Nuffield [Orthopaedic Center] as I was and never went back again – never saw my room, or my house again”.

June 18
1929 – The Tolkiens welcome their fourth child and only daughter into the family: Priscilla Mary Reuel Tolkien. 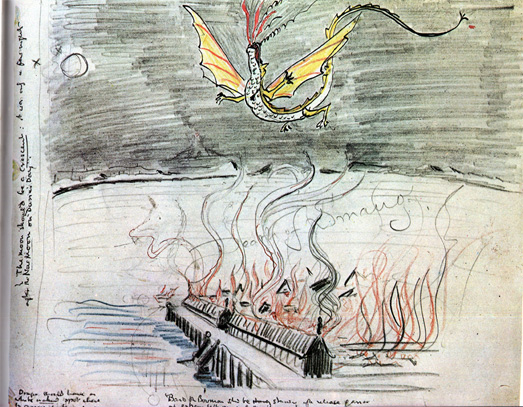 1965 – Tolkien’s letter to Joy Hill (HarperCollins archive) – encloses a “crude drawing (all I can find) of my attempt to catch a glimpse, beyond my skill of the death of Smaug….”

1967 – Rayner Unwin writes to Tolkien, informing him that he has received the proposed contract for the film rights to LOTR from H.N. Swanson, Allen & Unwin’s Hollywood agents and that the rights to the Hobbit have been sold also to United Artists by the previous owner.
2001 – Comic strip FOXTROT goes LOTR geeky.
1999 – Christopher Lloyd is seen around Auckland, sparking rumors that he may be joining the LOTR production.

June 20
1967 – Rayner Unwin writes to the Dramatic Publishing Company giving permission for the publication of an adaptation of The Hobbit for amateur stage, after alterations have been made, noting: “Neither Professor Tolkien nor I are concerned about the process of dramatization so long as it is a dramatization of the book in question and that intrusions from elsewhere conform to the spirit and style of the original.” (University of Reading archive). Joy Hill sends Tolkien a copy of a letter from the Performing Rights Society about “The Ballad of Bilbo Baggins” (a ’60s song later performed by Leonard “Mr. Spock” Nimoy), which Tolkien had asked to be investigated as to whether or not it infringes on any rights (Ms. Hill and Mr. Unwin believe that it does not).
1969 -Tolkien writes a letter voicing his opinion on the proposed film: ‘No film nor any “version” in another medium could appear satisfactory to any devoted and attentive reader. On the other hand some of the greater pictorial and dramatic scenes could, with modern resources, be a moving experience. All possible precautions have been taken that the story should be presented without serious mutilation and without alteration or alterations’ (Carandaith 2, no.1 (January 1970).
2000 – Cinescape provides TORn with a LOTR licensing ad.
2001 – John Rhys-Davies reveals that Gimli will try to destroy the ring, and Xoanan deduces that it will happen at the Council of Elrond and rumor has it that they will be doing pick-up shots from the Council the following week; another comic strip character succumbs to LOTR geekiness
2002 – A map of Middle-earth, drawn by Tolkien, sells for #4000 at Bonham’s in London