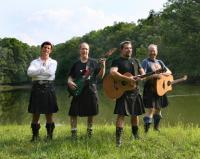 Celtic Folk Rockers (and TORn Friends) Emerald Rose received good news this week from producers at the American Movie Classics television channel. Their original instrumental ‘Unfinished Business’ has been chosen for a national commercial for a show called DVD_TV: The Graduate. The 30 second commercial begins airing on AMC this week on March 9 during the broadcast of DVD_TV: Forrest Gump and will air for the next four weeks. The commercial will be broadcast on satellite and cable channels across the US and marks a new level of success for the band. (If anyone can TiVO it, and upload to YouTube, we’d love to likn to it!)

The band is busy as ever, gearing up for St. Patrick’s Day area events starting with this week’s Dahlonega Celtic Music Festival, where they will share the billing with Irish supergroup Altan. Emerald Rose are featured performers in Atlanta’s St. Pat’s celebrations with shows at Underground Atlanta and several Irish pubs in the Atlanta area. For details and show times, check the group’s website at www.emeraldrose.com. [AMC Listing]