BOSTON, MA – Plenty has been said on TheOneRing about the new online Middle-earth game, “The Lord of the Rings Online: Shadow of Angmar“. It is a business story, a pop-culture story, a gaming story and an adaptation story. Finally at the dawn of the game’s hard release date, it is about time for a real review of the game. So here you go.

For those asleep at the wheel a brief recap is in order. Turbine Inc. has developed (a long story all by itself) a massive multiplayer online game that takes place in Tolkien’s Middle-earth during the time of J.R.R. Tolkien’s “The Fellowship of the Ring.” To those who haven’t done this sort of thing (probably a lot of Tolkien readers) it means that a player, on a PC, enters an imagined Middle-earth, heavily influenced by Tolkien’s text but also populated with conventions needed to pull of a successful game. The live experience involves completing quests for character advancement; perhaps with other players live at home on their own PC.

Everything points towards “LOTRO” being a strong horse out of the gate. In my visit to Turbine I felt a good bit of confidence behind everything the company was doing and saying. It even seems to be listening to customers, changing a policy that would have limited North American customers from interacting with European players.

So is the game fun? In a word, abso-freaking-lutely. It is fun to make up an avatar Dwarf, Elf, Hobbit or Man and explore more of a certain version of Tolkien’s world. But “fun” isn’t the final or only consideration here. Monopoly is fun and so is throwing snowballs at cars in the folly of youth, but is the fun worth the price? The price here is an incredible time sink and a monthly subscription for between $10 and $15 (Turbine rewards those who purchased early) and the game for a one-time $50. That formula has worked incredibly well for other online massive multiplayer games (MMOs) which consumes the free time of over 8 million monthly subscribers for the top-of-the-line game.

On a per-minute of fun basis, $15 a month is a bargain when compared to the cost of a two hour movie, a new CD, therapy or a massage. Like any of those options LOTRO is an escape from the stressful, sometimes mundane world. But enough with the rambles, let’s get to the nitty-gritty. 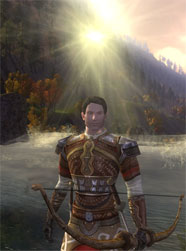 The game looks amazing. Middle-earth has been alive in reader’s imaginations for over 50 years and meeting expectations is a real challenge. Creating a game from scratch, with no preconceived notions or expectations, provides developers and programmers an open-ended mission to make the game look cool. But in LOTRO, the created world (perhaps the most celebrated in the history of fiction) must match – at least somewhat – the vision of millions who have already traveled through Middle-earth. So does the game pull it off?

One of J.R.R. Tolkien’s great strengths was making Middle-earth feel real rather than fantastic to the reader. The online Middle-earth is best with its exteriors. Trees, clouds, grasses, forests, hills, dales and nature in general are the visual foundation of the game. Indoors the visuals falter a bit. Not because they don’t still look “cool” but because the game feels more like a video game environment and less like an authentic experience. This isn’t because of the skill used to render the images but more with the design of cultures inside the game. Still, this is a wonderful game to see and the complaint that the video game interiors look like a video game is indeed a minor quibble. 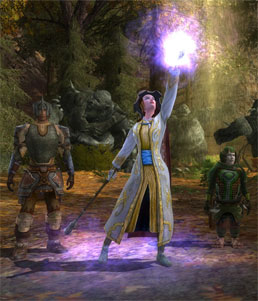 Yup, as previously stated, LOTRO is fun. Players must first create a character race and class which sets a locale and race and the foundation for the in-game tutorial that gets even new players off to a smooth start.

Middle-earth expands quickly as a player progresses levels with plenty of quests available from non-player characters sprinkled about the landscape. The idea is that characters will adventure, choosing quests of interest that provide in-game rewards such as improved armor or weapons or health. Meanwhile the player enjoys both the challenge of the quests and the satisfaction of leveling up while traveling through a computer version of Middle-earth.

In gamer slang I am a “noob” (new to the game or MMORPG in general) and I was occasionally frustrated with figuring out where to go to work on a quest. It was frustrating that a programmed character could want something, an item perhaps, but could only provide vague details on where to find it. Often other players provide tips but somehow I felt slightly stifled by the game. Once past the burden of navigation the quests are mostly well designed and quite fun. They can be tackled solo but often two players with different skill sets are better than one.

The richest moments of early game play happen when two players work together for common goals. Fighting a string of goblins alone can be a challenge for a starting player so when an archer and a brawler fall in together with a powerful long-range bow attack combined with mighty smash mouth blows with a sword, the goblins have short lives.

Ultimately, this shared experience is the key to enjoying the game. Killing cunning goblins or savage wolves solo, while mildly entertaining, isn’t satisfying for long. Those are activities suited more for an Xbox 360 combat game while the whole point of the multiplayer online experience is to drink the depth the of world and interact with other players.

Turbine wisely, has mostly taken out the player versus player aspects of some MMORPGs. Some games are oriented to tap into players and teams of players’ competitive instincts while LOTRO goes a different way.

There is an option for players who want to go toe-to-toe with other players. There is a section of the map where players can launch into monster roles and battle other players but borders prevent monster players from leading a band of Orcs into the Shire or a gaggle of Trolls from sacking Elrond’s Rivendell.

There is also a duel feature which is competitive but not destructive. 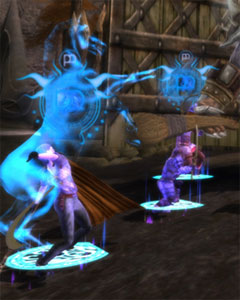 The joy in, even the point of, a massive multiplayer game, is to experience the game with other players. LOTRO can be played solo, probably extensively, but it will virtually always be more enjoyable when its social aspects and Turbine has gone to great lengths to feature this as part of the core of the game play. For a game that gets high marks across the board, this is probably the most appealing aspect of the game.

For starters, www.LOTRO.com has a solid system of forums to help users in various aspects of the game.

But it is the in-game society that is the real draw. The smallest formal unit of group play is appropriately dubbed a “fellowship” (not to be confused with The Fellowship) and consists of six or more players. The larger kinship is more permanent and creates a more permanent pool for individuals to draw other players from to aid in adventuring. This is where the game goes from fun to on-line crack. When the game play becomes social the deep addiction kicks in, which can be both good and bad.

Players can and do visit landmark locations from the written “Fellowship of the Ring.” If you want to hang at the Green Dragon, with your fellowship or kinship, feel free. And what is more, there are various ways to enjoy the company: 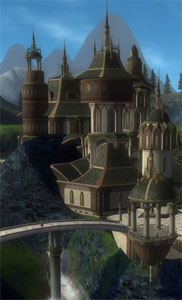 The launch of LOTRO was never intended to be the “final” release of the game. Turbine has a lot of tricks still up its sleeve but has delivered an extremely polished out-of-the-box game. Games like this often have a lot of challenges at launch. Turbine’s own “Dungeons & Dragons” game has come a long way since the day it was first playable. The format with the constant patches, fixes and updates have massaged the game into something superior to its launch in every way.

LOTRO is already polished from its extensive development, big beta trials and its soft “try-out” launch three weeks ago. Today officially is the final product, but the game has been consumer ready for a long while with only tiny tweaks. The most heartening part of all of this is that the content of the game will evolve and improve. The emotes, for example, are a recent addition that enhanced the role play in just the last week. Kinships or individuals will likely be able to construct or buy dwellings in the future and the current playable map leaves a lot of Middle-earth yet to develop. In other words, even the finished game will never be finished.

The first grand update has already been announced. Last Friday the new content was introduced with, “Beginning in June, heroes can adventure to the Shores of Evendim, the first of many free updates to The Lord of the Rings Online.”

While this is a review for the existing game, part of the reality of the existing game is that the developer (Turbine) excels at improving games. The prospect of the whole of Middle-earth as mapped by Christopher Tolkien for his father is real. In fact, Turbine is highly motivated to constantly improve and expand its content because its financial stake is tied up with retaining and growing its monthly subscription base. 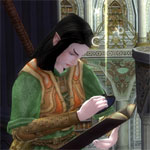 LOTRO is fun. While there has been an admirable attempt to balance a fun game with reverence to Tolkien’s Middle-earth the translation isn’t exact. Those expecting to find the book on-line will be disappointed. Those looking for a fun game inspired by Middle-earth will enjoy exploring. The novels cover only a rail through gigantic maps while the game fleshes out the rest with genuine fun. The game shines as a social interactive environment and a series of carefully planned features make this the best part of the experience. Time spent in Middle-earth was satisfying and fun but it is thoughts of pushing the borders of the current map that really induces salivation. Turbine has released a splendid game that is an acceptable version of Middle-earth.