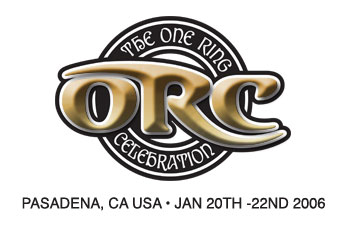 With just a little over 3 months to go before ORC 2006, TheOneRing.net and Creation Entertainment are proud to make a few guest announcements.

First off, one of the hardest working actors in Hollywood, Mr. Sean Astin, is back again. With his wonderful part in TNT’s summer success “Into the West” and his current new role on Fox’s “24“, Sean will have some wonderful stories to share from the sets of both projects. In fact, 24 will have just begun the weekend before ORC 2006, so I expect everyone to be bursting to ask Sean for all the secret details regarding CTU and Jack Bauer.

Joining Sean at ORC 2006 will be John Noble, attending his first event with TORn and Creation. John is currently filming in Vancouver for Stargate SG1, something I know will garner loads of interest from fans. Will he be a good guy or a bad guy? Find out with us at ORC 2006.

We are also well on our way to bringing you some of the best evening entertainment out there. Charles Ross is back with his incredible “One Man Lord of the Rings Trilogy” performance. You won’t want to miss this, and this time around, he’s on Friday evening so as not to interfere with flights home. We also found, right in my own neck of the woods, The Fenians, a wicked-cool high energy band from right here in Orange County.

This is just the beginning, there will be more special guests, more evening entertainment, and more fun to announce soon. In case you think we’ve forgotten our Tolkien fan base, don’t worry. We are working hard to bring you Tolkien scholars, artists, costumers and authors. We’ll have film and video contests, a full art show, costume contest, and the One Ring awards, celebrating the full range of Tolkien Fandom out there. And of course, no show would be complete without you, the best fans in the world. We even have some interactive events in the works for all you wonderful Ringers to participate in. Get ready for the biggest bash this side of Bag End.

Posted in Old Special Reports on October 15, 2005 by Celeborn