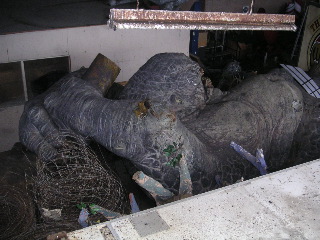 I was down in Wellington recently when friends reported seeing a truck passing by their house with a giant cave-troll on the back. The Troll and Fell Beast have been taken off the buildings where they’ve perched since before the World Premiere last year. After a short time lying in a field they started to get damaged by people climbing over them, once the newspapers had reported on their whereabouts. So now they’ve been moved.

Well, I’m not going to say where they are now, for that reason. And also because while I’m willing to climb up some rotting wood and rusting tin, or climb tall wobbly ladders in order to take photos, I’m not going to be responsible for somebody heavier or less lucky injuring themselves doing the same.

Climbing up said rotting wooden bits netted me some poor shots through a small gap in the wall. My friends went back and got a truck and a ladder so we could reach a more substantial hole in the wall just under the roof. Just as they were propping it against the wall of the building, the police turned up. I saw them first; my friends were oblivious. I had the interesting task of trying to run towards them in a casual and non-guilty-looking way while shouting very quietly “Put the ladder away, the cops are here!” God only knows what the cops were looking for. They turned around and drove off without even looking at us and our ladder propped against the wall of a lonely warehouse in the middle of nowhere.

I climbed up and stuck my head in the small opening under the roof. There was the Cave Troll, resting on his back in the dark amid a heap of other strange debris – badly-made paper-machier trees (not from Weta obviously), plaster swans, part of what looked like a large model Saturn V rocket, and various rejected decorations from other shopfronts. It was a graveyard of sorts. Rubble, dust, rusting girders and chains hanging uselessly from the ceiling – it was a very sad sight.

Later my friends rang to say that a funeral cortege had passed by carrying the Cave Troll’s friends – the giant Gollum that used to sit on the roof of Wellington Airport, and the Fell Beasts and Nazgul from above the Embassy and Reading cinemas. So perhaps we have seen the last of them – they have gone to their final resting place, their long home.