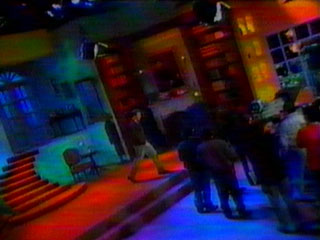 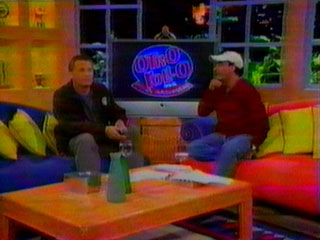 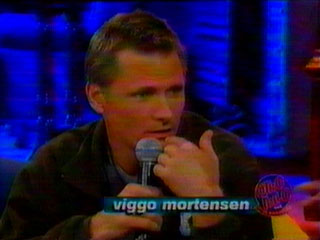 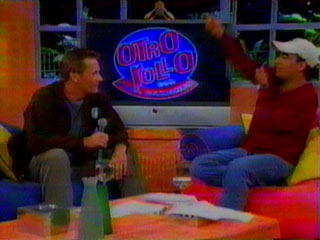 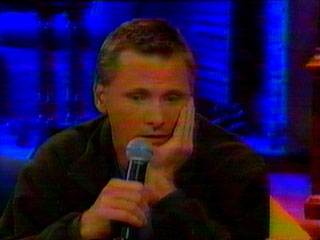 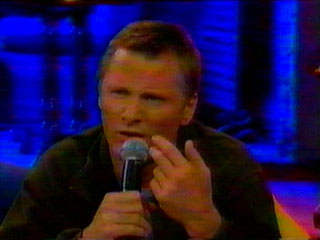 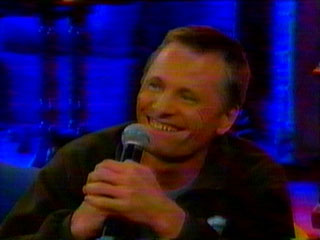 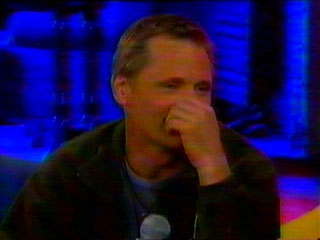 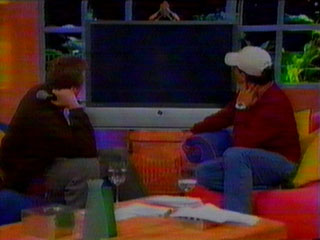 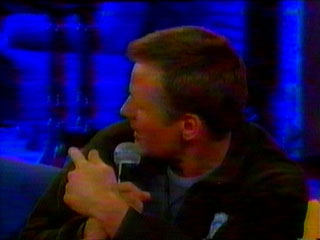 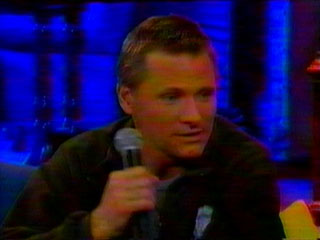 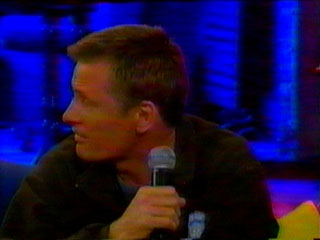 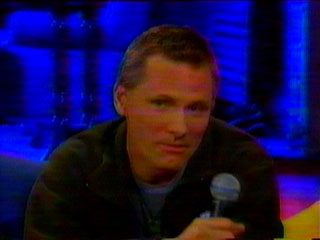 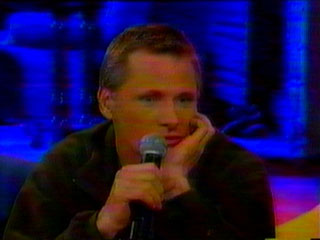 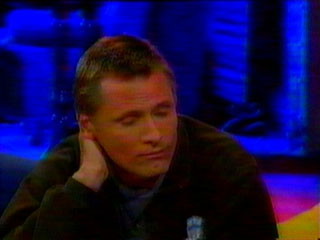 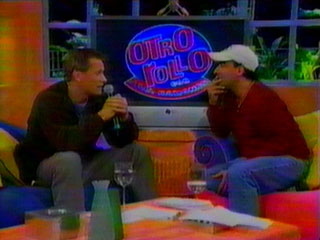 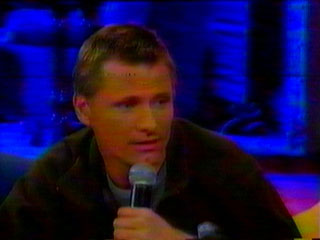 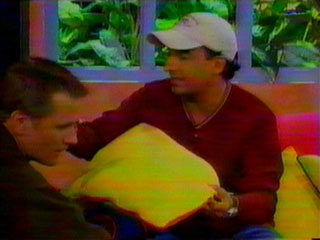 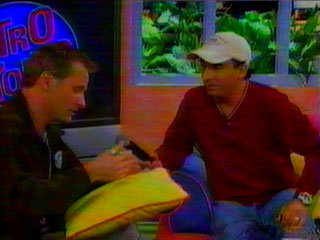 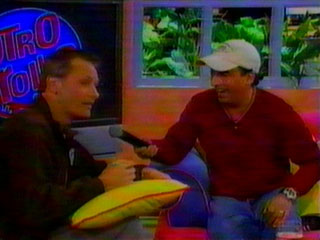 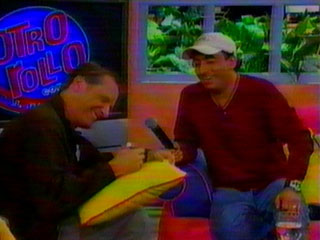 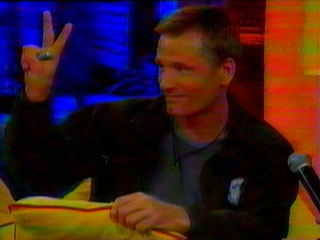 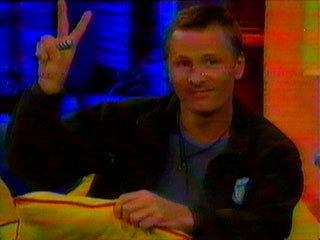 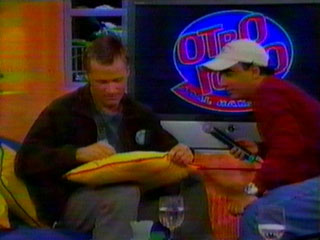 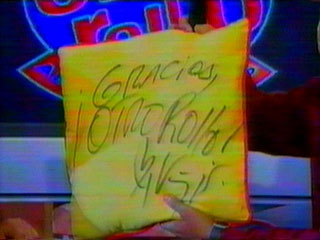 Mithveaen writes: I’m sending you a transcription and some photos from Viggo Mortensen in Otro Rollo, a Mexican show.

My impression is that despite the little knowledge from Adal Ramones (Otro Rollo’s host) about Viggo’s career and The Lord of the Rings movies (he presented RoTK trailer as TTT scenes), it was a delight watching Viggo very relaxed and having fun, speaking Spanish in a very strong Argentina accent. Personally I found quite lovely when he used expression and gestures very characteristic from Latinoamerica people.

Here is my translation with some comments and my pics. Sorry for the poor quality!!

*After being introduced by Adal Ramones, Viggo enters to the set using those stairs. Adal welcomes Viggo and both sit down*

Adal: Viggo, you are… your father is from Denmark.

Viggo : Yes, my father is Dutch and my Mother is from US.

Adal : But it turns out that you speak a perfect Spanish, because you had traveled a lot, obviously because of your family.. because of your father specially, have you been long time in Latin America as well right?

Viggo: Yes, *points his microphone* Speaking with this you can understand me? *chuckles*

Can you hear me?

Viggo: Yes, I grew up in Argentina, I lived there until I was 11.

Adal: Yes, but why did you traveled so much Viggo? Was your Dad a diplomatic person or??

Viggo: No, he had different jobs, I also lived in Venezuela, we lived there one year… later I lived 10 years… 9 years in Argentina.

Adal: Because of that when you speak a fluent Spanish with that accent obviously.

Viggo: Yes, it has stayed with me.

Adal : The movie Perfect Murder… I was amazed to know as you played a painter, that the paintings on the movie are yours.

Viggo : *drinks water* yes, it’s true, well… more and less…. all of them were (based on) photographs, I knew better this..

Adal : A combination of paiting and photos.

Viggo : Yes. yes.. they gave me a couple of weeks and I got into that.. and I liked it very much… *insists with his microphone with audience* can you hear me??

Can you hear me??

Adal : Of course we can hear. Can you hear him well? (*audience exclaims yes and Viggo laughs*) or should we increase the volume?

Adal: Tell me how you got this role in this LoTR trilogy, because it’s one of the most box-office grossing movies in the movies history.

Viggo: Well, it was luck, there was another actor, and at the end, I don’t know…. he couldn’t do it… and when I arrived they had started shooting and the others actors had been already there for few months in NZ.. and I don’t know… I got it for pure luck… but no… it’s not like… I mean nobody knew that it was going to be so sucessful you know?? *this “you know?” is a very typical Argentina expression* Now it seems to be something of pure luck, but it was risky for (New Line Cinema) company .

Adal: it was an experiment.

Adal: And now.. your situation in the first 2 movies.. *more nonsense from Adal* because let me Viggo tell to our audience that when you shoot some scenes, and maybe the director decides to remove them from the film, and you think you are in the film, but you are not..

Adal : Then, I read in your biography that you worked with Woody Allen, and you weren’t in the scene, in the film, he cut it, and for an actor, suddenly, watching the film and saying “Gee, I was supposed to be there”

Viggo: Well, if they don’t tell you in advance then you are a little bit embarassed.

Adal: But if they tell you… but just imagine, you take (to the theather) all your family your friends.. nad you say “This is my scene.. this is my scene…. hey what happened??”

Viggo: Well, they called me liar, my family, I told them several times, it comes a movie… I am in a movie una pelicula and they go to see it… the first one, the second one.. the third one.. and they tell me “Well what are you doing in New York?? Drugs or what??”

*Adal introduces by mistake RoTK trailer as TTT scenes, it seems Viggo says No.. and someone corrects Adal. They see the trailer*

Adal : Tell me something…

Viggo: Let’s see if this (RoTK movie) is a goodie…

Viggo : I haven’t seen it as well. (here Viggo makes a Spanish gramatical mistake very common, instead of saying “Neither” he says “As well.”)

Adal : Haven’t you seen it?

Viggo: No… tell me…. have someone ever fell down from those stairs??

Adal : Yes, someone has fell down.

Adal : Well I don’t know… but yes, some people has fell down… *audience laughs*

Viggo: And you get in here rolling around yourself?

Viggo: And what happens next?

Adal : Hey tell me something… I know you made a lot of the stunts… what does your agent tell you?? because there are people who represent the actor, and they tell him “Don’t do this, you can hurt yourself”.. but why this desire from you to do it..

Viggo : I don’t tell anything to my agent.

Adal: You don’t tell him anything..

Viggo: No.. and later they see the film…

Adal : And when they see the film they say “What were you thinking!!” Hey and you had sword teachers, I imagine myself that is like being in a theme park.

Viggo: No… it’s quite funny, as any children I played with wooden swords and pretented to be the hero and all that.. .

*Note: with these “no” he’s not denying what Adal says… it’s a way to speak some Latinamerican countries have like saying “Yeah, you can’t imagine that…”*

Adal: And now as an adult doing it again… imagine, when you are a kid you did it..

Viggo : Mhhhmmm *again that very lovely noise he makes but this time noding*

Adal : And as an adult doing it again..

Viggo : And it’s a great story

Adal : Yes.. it’s a great story.. and what other projects do you have?? Because this movie was already shot…. what upcoming projects Viggo Mortensen has?

Viggo: Well, I have had some photo expositions in Cuba, US, Denmark, I have another one quite large now in NZ at the end of this month… and a movie we made the last year… the name is Hidalgo, not the Hidalgo from Mexico (our Independence National Hero’s name is Miguel Hidalgo), but it’s the name of a horse… a story that will be released next March… and it’s a nice story, interesting in these times we live… because it’s about an American, a NorthAmerican that travel… to what is called now Irak and Siria.. that zone… very interesting.. a true cowboy, not the one who pretends to be

Adal: A Cowboy there..

Viggo: and pretends to be a cowboy, and goes there to do other things, the one I play he goes there to make a horse race, and to learn, not to conquest and steal the oil to nobody, he goes there, do his things…

Adal : It’s his way to connect with the people there..

Viggo : and he comes back home, it seems to me that is a good example, specially for the US young people.

Adal: And now I know.. and I love it… that besides of being a painter, photographer and actor… you are also a poet..

Adal: Do you like to be with yourself? To enjoy your own company?

Viggo: Poetry, paiting, photography, all those things… I don’t separate them… they are the same as acting… that is a way to communicate with yourself and ask questions about what is around you… I don’t know.. a way to figure out things..

Adal: Hey Viggo, now coming back to the scene *points the TV where RoTK trailer was shown* I was watching your face when the dragons were flying *please don’t flame me, Adal knows nothing about RoTK and he called Dragons to the Nazgul* I was watching your face like saying “Wow.. that looks great…” of course when you are shooting you don’t see the Dragon, actually the Towers aren’t even there.. a lot of things are CGI…. do you amaze yourself watching you on the screen?

Adal : You are still amazed with that magic..

Viggo: Yes, and though I know the book very well and I know what we shot, the director (Peter Jackson) alwasy amazes us, so we can’t wait.. all who made the film… we’re curious to see what he (Peter) did.

Adal : We’re very happy than an actor from your league is here in Mexico and in our show, but above all, to see you like this because I got this vibe from you, as a person very human, humble, down to Earth, and of course quite creative and intelligent.

Viggo: Thanks for inviting me to your show.

Adal: No, the pleasure is ours… we’re leaving but… un cojin, all the International starts… I would like you sign this to Otro Rollo

Viggo: Let’s see how do you feel with that *points the microphone, because it was quite obvious that Viggo wasn’t very happy with the microphone in his hands. When Viggo says this, he nods his head in a very particular way we Mexicans have.. in a very challenging way like saying “Ok, now it’s your turn to do this”*

*and grins to the audience who laughs*

*and he also laughs*