Hello everyone. I was talking to Calisuri at the Baggins’ picnic in LA last month and we discussed the Lord of the Rings game. I said I had played it frequently with some friends and offered to review it, and he thought that was a good idea. Now, I’m not sure what should go into a game review, so I’m just going to discuss it as if nobody had ever heard of it before, including the basic rules and my thoughts on it. 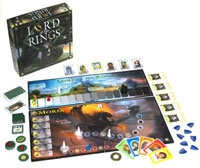 The game is, of course, Lord of the Rings. It was designed by Reiner Knizia, one of the most prolific and respected game designers in the world. He is German (like most famous game designers), but don’t worry; the game is entirely in English. It is readily available in game stores, bookstores like Barnes & Noble, and even Target. If you are suspicious about a LotR game coming out simply to profit from Tolkien-mania, I completely understand. However, let me assuage your fears. The game is not some cheap knock-off with no inherent quality; nor is it even movie-related. It is, in fact, a stellar game based on the books that has gotten lots of publicity due to the movies’ success. The quality of the pieces, boards, artwork (by John Howe), and the mechanics of the game itself are marvelous. So now let me go into some specifics.

The most important thing to know about this game is that, although it is a board game, it is nothing like what you’ve played before. The main reason is that this game is a “cooperative game.” As in, all the players are on the same team and you play against the game itself. You win or lose together, not individually. Each player (from 2-5) is one of the main hobbits, with the 5th player being Fatty, and places their hobbit marker in the Shire section on the main board, a kind of progress tracking board from Bag End all the way to Mordor. The Sauron marker starts in Mordor and moves toward you, while you move closer to Mordor. If Sauron ever is on the same space as you, you are corrupted and are out of the game. However, this board is really only like a scoreboard, and is not involved in the actual playing of the game. 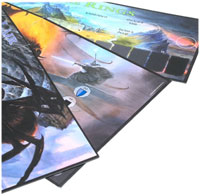 For the actual game, there are other boards, each one representing a section of the Fellowship’s journey. There are Moria, Helm’s Deep, Shelob’s Lair, and Mordor. On each of these boards are bad obstacles and good events (all tied into the book). There are two ways to get out of each board: either the bad obstacles overwhelm you and you barely hang onto life, or you can accomplish all of the good objectives and emerge victorious from the struggle.

There are two phases to these boards–the event tiles and the player turns. On each player’s turn, they draw a random tile. It will have good consequences or bad. If bad, you must overcome the obstacle and draw again. If good, you now have an opportunity to play cards from your hand or perform other actions that are available. Each card played will advance the Fellowship through the good objectives, collecting resources along the way. There are also options to move away from Sauron or draw more cards. 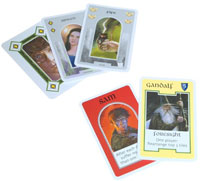 Among the resources that can be collected are shields, which are not only points but also a means of using Gandalf’s powers. When a player has 5 shields, they can be exchanged for Gandalf’s assistance, which can be quite powerful. Players can also collect tokens to help stay away from Sauron and more powerful cards than the ordinary ones. Every player and artifact from the book (besides the hobbits) is a card, usually with a specialty. For example, Gimli specializes in fighting, while Shadowfax specializes in traveling. These special cards are crucial to a successful journey. In addition, there is an actual ring that starts in Frodo’s possession. It may change hands throughout the game, but it can be used only once per board. Naturally, using the ring is risky; it can be quite helpful but can also cost you dearly, so use it wisely.

Players continue taking turns until the board is finished, either through bad obstacles or good objectives. After the board, the markers move according to the progress board. For example, after the Moria board, the Fellowship goes to Lothlorien, where Galadriel gives assistance (in the form of cards). These include the boat, the cloaks, the phial, etc. All the details from the book are in here.

In this manner, the Fellowship progresses through the journey. They meet characters, use resources, overcome obstacles, etc. Everything comes from the books, even if it has been changed to fit a game format (like Fatty accompanying the 4 hobbits). The changes are all minor and necessary. When and if the Fellowship gets to Mordor, there is a real feeling of accomplishment, yet despair at being so far away. If the Fellowship arrives at Mount Doom, they have one last chance to destroy the ring. If nobody can do it, the entire Fellowship loses. If the ring is destroyed, everyone wins and points are given according the rules. 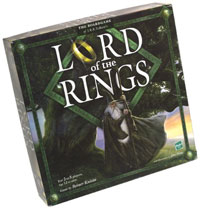 I hope that gives everyone a general idea of how the game is played. Now I’ll add my own thoughts about the game. Clearly, if I’ve played it frequently and volunteered to review it, I enjoy the game. Playing as a team with the other players is quite unique, and it’s much less likely that anybody gets upset because they’re losing. There is a lot of social interaction and strategizing together. One player may get into trouble and another player will have just the card to save the day. Discussion of how you can help others is not only allowed, it is encouraged. More experienced players can assist rookies with their decision making by pointing out potential consequences. Yet individuals still have autonomy to do what they think is best. And you can take the theme as far as you want; my friends occasionally slip into character while playing. However, it is NOT role-playing (like Dungeons & Dragons); nor is it a collectible card game (CCG). It’s just a unique kind of board game.

The amount of detail may be overwhelming to new players at first. There are so many pieces/cards/tokens to the game that it appears quite daunting. But everything is integrated very well and the rules are clearly written. It won’t take long until everyone can remember all the options and what all the pieces are for. And once people are more informed, that makes the decisions that much harder. With so much to consider, what is the best way out of a tight spot?

A common criticism of this game is that once you’ve beaten it (destroyed the ring), there is no reason to play again. I disagree. The game changes every time, not only because of the random element of the tiles and cards that are drawn, but also because of the different players and their strategies and choices. It is rare that Gandalf’s powers are all used; different situations may require different cards to be summoned. Though the boards and cards don’t change, each individual game does, and I certainly haven’t tired of it yet. It takes such care and thought to actually destroy the ring that it never ceases to be a thrill when it happens. It’s quite fun for the Fellowship to bask in the glow of victory.

Finally, another thing that makes this game great are the two expansions. The initial release was such a hit that two expansions have been issued, all with the same designer and artwork. They blend into the game seamlessly, and you can use them in any combination. These two additions ensure that the game NEVER gets stale because they add such different aspects to the game play. I will review these expansions next time; for now, I hope you enjoyed reading about this game and I encourage all of you to go out and try it.

To purchase the “Lord of the Rings” board game on Amazon.com use the following link. [Click Here]