At the recent Collectormania 4 TheOneRing.net got the chance to talk to Kiwi actor Lawrence Makoare who played, amongst others, Lurtz and the Witch King about make-up, Christopher Lee and punching Viggo Mortensen in the face!

Lawrence, did you read the books before you started working on this film?

LM: No I’ve never ever read the books before we started filming.. actually, I still haven’t read them. I’d rather wait for the movie because I’m not much of a reader. I read comics, but that’s about it. I mean that book is so thick, it would take me about a year to get through the first one. I don’t think I’ll ever read because I just don’t like reading hehehe. 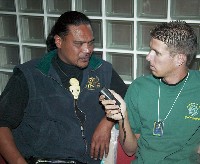 You should get the audiotapes then.

LM: Hahaha yeah.. Or I’ll just get the movie.

Close enough. So how did you get your part in the movies?

LM: Like everyone else, by auditioning. My agent got me the audition and I went along. I had to actually audition for Snaga, some character from the movie. He was an Uruk-hai. It was funny because, you know, I hadn’t read the books and I didn’t know what the hell an Uruk-hai was. What is an Uruk-hai? Is it some kind of foreign people? From.. somewhere? I didn’t know. So it’s hard to get around the character. And we were supposed to do it in a cockney-accent, an English cockney-accent and that was also really hard for me because I had never done accents and stuff before. Lucky my ex-sister-in-law is from Bristol so she taught me what a cockney-accent was, that was really helpful. So I went to the audition and what they actually had was like silhouettes against the wall, from Hobbit-sized scaling up, way, way up to…

LM: Yeah, heheh.. So what you did after an audition was stand next to the silhouette that matches yourself, they take a photo, it gets sent to… well Peter of course, and the production people for final analyses. And a couple of days later I got the call saying: “We want you as an Uruk-hai.” And again I was like “what the hell is an Uruk-hai?”

I bet if they told you it would require eleven hours of make-up you wouldn’t have taken the part.

LM: Yeah! Oh maaaaannn… If I knew that.. I don’t think anyone knew what they were getting into. We didn’t start with the eleven hour make-up, we started with the four-and-a-half hour make-up and even that the first time was really tiring, just sitting there for four-and-a-half hours. The eleven-hour make-up came about two months later. They said: “We are going to do you up as the naked Lurtz now.” And I was like “ehh?”

You’d think that was less make-up

LM: Yeah heheh.. So I thought they wanted me to be, you know, naked, but they said: “Nah don’t worry you are going to be painted. Sorta. Kinda.” So I said okay, that’s cool just paint my body up. But it wasn’t like that, it was eleven hours.. And that’s the first instance when I said: “Oh what the hell did I get myself into.”

But my feeling now about it is that I would do it all again. This was an opportunity you know that fans and stuff would die to do. It was just […] of this creature being created right in front of your eyes, while I was looking in the mirror. And when it was finally finished I was just.. “Wow.. far out man. Look at this, is this really me?” And I couldn’t believe it was me because it didn’t look like me and it was really, really scary. And I was doing the facial expressions and just thought: “This is wicked, this is starting to get cool.”

What was your most memorable experience of filming The Lord of the Rings? 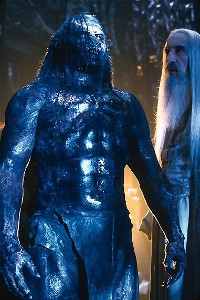 But my ultimate, ultimate.. errr… part I liked in the movie, loved actually, was meeting Christopher Lee. That will be the highlight of my whole career. Same thing with the Lord of the Rings, those will be the highlights in my entire career. No other movies will come close to that. To the experiences that I’ve had on Lord of the Rings. But Christopher Lee man… he commands this magical presence which I was just in awe of. I would just stand there and listen to him telling me all these stories of his experiences in the like over 300 movies he did. And I could just sit there for hours and hours and hours and I was like “Stuff the movie man, I’d rather sit here and listen to you.” It was just fantastic to work with a man of his calibre.

And I’d just.. I mean.. I never ever dreamed of working with a man that scared me as a kid. He used to scare the living daylights out of me actually. It was that bad that I had to hide under my brothers bed. Because Dracula was always on Sunday nights, and we always used to watch Sunday-horrors and Christopher Lee was Dracula and I was just sooo scared I had to hide under my brothers bed and just shiver. And when we did the naked Lurtz scene, when the character was getting born I was like “Yeah man. This is the ultimate payback that anyone can get with Christopher Lee, just to scare the **** out of him.” But they told me.. they warned me beforehand they said you can’t go and scare him. Because he was on set and I just wanted to run up and go rrroooaaahhhrrr!!! And you know, scare the **** out of him. And that what I wanted to do just got thrown out the window when they said: “No you can’t. You can’t go up and scare him because he is 78, his heart ain’t what it used to be and we really can’t afford to loose him at this point in time, we’ve only just started with this movie and we’ve got two more movies to do.” Hahaha!

So it was just a silent approach, and I said “Hello Mr. Lee.” And he turned around and goes [does Christopher Lee impression] “My god, you must feel very uncomfortable in there.” And I was: “Yeah I’m not too bad..” he goes: “36 years ago when I played the Mummy…” And I went: “Woaahhh! I wasn’t even born then!” Hehehe… Man.. he was just amazing that’s been the highlight and will always be the highlight of my career.

Will we be seeing you a lot in The Return of the King?

And do you have any other projects coming on? Because you did the James Bond-movie (Die Another Day)..

LM: Yeah I did that.. Well.. Because Peter (Jackson) is like.. he’s already started initial filming on King Kong. There may be a window of opportunity there as some sort of tribesman yeah. But over in New Zealand they are going to start filming The Lion, The Witch and the Wardrobe.. there’s a possibility there. But you really never know what comes until your agent give you a ring or someone else rings you saying: “Oh look I’m really interested in you or stuff like that..” So we’ll see.