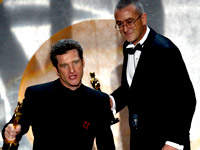 Last year Paul Badali created 18 stunning mallorn leaf pins for the LOTR cast and crew nominated for an Oscar. We were more than stunned while watching the Oscars from our first party, and seeing PJ and others wearing the pins! It was at that moment that I knew we’d be doing something special for them again in 2003.

This time around the pins were red in color, cast in the shape of a roman numeral ‘two’ (II) they showed the two towers of Orthanc and Barad-dur with the words ‘Good Luck from TheOneRing.net’ set in gold. These pins were given to the crew nominated for Oscars this time around, we were delighted to see sound engineer Ethan Van Der Ryn proudly wearing his pin up on stage!

When all the Oscar winners arrived at the party later in the night I made sure to ask them if they had their pin, and ask them how they liked them. They were all very gracious and thanked Badali Jewelry and us for the pins.

Leave room on your lapels for next year boys and girls!