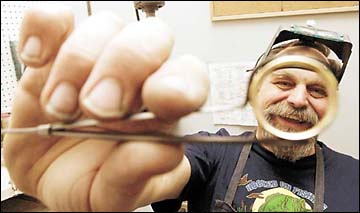 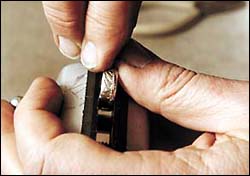 LAYTON — The One Ring.

Fans of J.R.R. Tolkien”s “The Hobbit” and “Lord of the Rings” know the meaning of The One Ring. And Paul Badali, who has recreated the ring, is one of those fans.

When Badali learned the movie “Lord of the Rings” was going to be made, he set out to create The One Ring.

Badali said he first read “The Hobbit” as a junior in high school.

“The reading of “The Hobbit” that first time was a turning point in my life. I have been shaped and molded by that first experience with J.R.R. Tolkien in very real ways,” he said.

Then when Badali was going to school at Brigham Young University, he read “The Lord of the Rings.”

“It is a college-age rite of passage,” Badali said. “Freshmen and sophomores in college read it. I have been a Tolkien fan since then.”

It was the second book that helped Badali continue down the path to creating the ring. He is now a jeweler, crafting “The Ruling Ring” and other fantasy-related jewelry — dragons, snakes, spiders and custom Norse Rune rings.

Fantasy has played a role in his life. When he and his wife were choosing a name for their first daughter in 1975, he suggested Lothlorian from the Lord of the Rings. His wife liked it, but shortened it to Loria.

Badali said The One Ring may be thought of as evil, but to him it has another meaning.

Badali cleans up the engraving on one such ring.

“The One Ring is a symbol much like that of the cross to Christians,” he said. Badali said the crucifix is about evil done in the world, but it has become a symbol of the greatest sacrifice.

“I feel that the One Ring, as well, is a symbol of Frodo”s willing sacrifice to rid the world of a great evil,” he said.

It represents the sacrifice each was willing to make.

“It reminds us that right will always triumph where good people refuse to tolerate evil and that one individual can make a difference,” Badali said.

Badali has loved natural stones since he found his first crystal at the age of 5. He has hunted stones in various parts of the states and has mined gold.

In 1970, he saw a friend cutting and polishing stones and became interested in doing that himself. He studied design classes at Weber State College and later went back to teach that same class at Weber State University.

Badali opened his first jewelry store in 1975 and tried to make The One Ring. He tried again in earnest in 1997. By 1998, he finally had a ring good enough to sell. Then in 1999, he made the ring into a more rounded, flattened style.

When Badali began making and selling the rings, he said he had no idea there were trademarks involved. A customer asked him if he was licensed with Tolkien Enterprises.

Badali said he had never heard of the company, so he did some research and found that the Tolkien Family Estate had sold the rights of “The Hobbit” to Saul Zaentz, owner of Fantasy Records and a movie producer.

Badali contacted Tolkien Enterprises and got licensing rights to continue making The One Ring.

Badali has owned several jewelry stores, but said he found out they didn”t pay.

“I”m a five-time loser with stores,” Badali said. “In 1998, I found that 30 percent of our sales were on the Internet and 95 percent of my expenses are at the front door.” So he closed his store and went to work for Ari Diamonds where he worked for two years.

“That was the gap between closing the store and going to the Internet and making jewelry that is appealing to a niche audience,” he said.

He now has a factory in Layton where he makes all of his jewelry.

“Most of our jewelry is science fiction,” he said.

The One Ring has an inscription on the outside that translates to: “One Ring to Rule them all, One Ring to find them.” Inside of the ring it says: “One Ring to bring them all and in the darkness bind them.”

The elfish runes are deeply engraved into the metal. The rings are made of several different gold weights, beginning in price at $480 and going to about $739.

All of the jewelry is sold on his Internet site: badalijewlry.com and is sold to people around the world.

“We ooh and aah about a sale in Utah. We sell them all over the world. A sale in Utah is unusual. It would not be possible to sell them without the Internet,” Badali said.