It is the first of March and I find myself deep in the bowels of the Century Plaza Hotel in Beverly Hills, with Asfaloth by my side. She carries a camera, I carry a microphone. The two of us have been bustling about all evening, trying to get the best video footage of Peter Jackson and Cate Blanchett.

We have already seen a crazy song n’ dance number from Sean Astin, but we’ll post that later.

Tonight, the venerable DGA honors the very best directors of all stripes; including those working in feature films, television, commercials, daytime serials and yes, even documentaries! (Let’s hear it for the docu crews…. woo-hoo!)

Standing in the painfully crowded and brightly lit Press Room, we watch the monitors with delight as Cate Blanchett speaks to the audience in the main auditorium. She acknowledges her director for all his time and dedication on The Lord of the Rings trilogy. Peter is given a huge, shiny award medallion just for being one of the five nominees in the feature film category. Whether he wins tonight or not seems beside the point, for he has his name on a very short list of the world’s greatest — including Roman Polanski and Martin Scorsese (himself a living legend)! Peter seems thrilled and perhaps a bit tired. You must realize he has just gotten off an 18 hour flight from New Zealand and has been running around all day with no proper sleep. He accepts the medallion with typical Kiwi grace, very soft-spoken but full of potency. 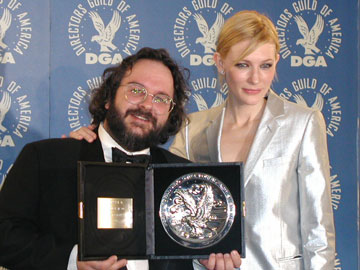 After thanking his partner Fran Walsh, Peter is showered with applause. He and Cate are now arm in arm; both coming back to join us in the Press Room. The reporters rev up their cameras as the pair step towards the lights. PJ comes right up to the mic and the first question comes straight from me. I ask, “How do you use camera work when you are creating such an epic film and then bring it down to such intimate details at the same time?” He speaks with confidence about working with the epic scale of Tolkien’s story, something he admits also works as “very intimate in its storytelling and its emotions. Really we’ve taken our ‘guide’ from the book.” He also confesses that he is eager to get back home to finish work on The Return of the King: “It’s my favorite of the three.”

Cate seems strangely bashful tonight; and looks suspiciously like she is blushing. Asfaloth captures an excellent close up of Cate, zooming in with her digital lens. When she was given the opportunity to work as Galadriel, Cate admits: “I was on the next plane. I think he’s a genius! And to make one of these films…. let alone three at the one time, I just think is unheard of. A phenomenal, Olympic feat!”

The other reporters seem eager to ask more of him and Cate, but the stage manager is impatient. Everything moves at quite a clip around here, and soon the next award recipient will be arriving. They stand for a few moments more — and the paparazzi goes nuts.

Later in the evening, a stunning upset! Most folks were assured that Martin Scorsese would win best feature film director for Gangs of New York (while privately I was hoping against hope that PJ would really win). But in the end, it was given to Rob Marshall for Chicago. Everyone in the press room gasps with surprise. Just goes to show, you never know with these things. The big finish for all of us LOTR fans will probably be next year.

When all the excitement of tonight is forgotten…. we will, all of us, still have the promise of ROTK. PJ’s goal, to bring the story to a massive “bang” of a conclusion, will thus be the final chapter that brings him the acknowledgement from his peers, the Director’s Guild.