Day three already.. To be quite honest this was my first convention ever (not counting the smaller ones we have in Holland every now and then) and I have to say that the days flew by!

The final day of the convention again started at 10am (which really is not a good time for me on sunday-mornings) with the second autograph session, especially for those who didn’t get the authographs the first time around. Even though I already got all the autographs in my fully-signed copy of LOTR (I wonder how much it would go for on eBay..) I didn’t really have anything better to do and decided to stand in line for a while, talk to fans and basically experience a autograph-line. One thing I noticed was the good mood of all the actors who were signing (after all, it was 10am and all)! It was great watching them take all the time for their autographs, personal messages, pictures and short interviews. I joked around with Mark Ferguson saying he wasn’t important enough to sign my book, followed the line until Sarah McLeod who was had her youngest daughter with her (awww…. how sweet!), Craig Parker, Cameron Rhodes and last but certainly not least Brad Dourif! The entire line didn’t take more then 45 minutes which I thought was pretty quick! 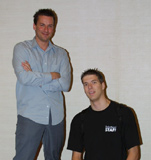 At one o’clock it was time for the first panel with Cameron Rhodes, which turned out to be better then I expected! As I said in my previous report the actors who were present at RingCon (with the exception of Brad Dourif) didn’t really spend a long time on set so didn’t really have a lot to say. And although their enthousiasm made up for a lot it would sometimes happen that an actor would stand on stage during his panel and no one would ask him a question, leading to awkward silences. This was however not the case during Cameron Rhodes’ hour! Cameron was a great entertainer who did an awesome job in answering all the questions from the fans and pretty much keep them busy for an hour (of course I couldn’t go saying bad things since I know he’ll be reading this)

It started off with the screening of a showreel which showed various clips from Cameron’s career until now; the clip from The Lord of the Rings of course, as well as some scenes from the British serie ‘Black Knight’ and ‘Xena: Warrior Princess’, and he then went on telling a few stories about what it was like working on these productions.

After that he really got the crowd cheering when he started to read a scene from Farmer Maggot from the books with a perfect English accent! He then continued to tell a bit more about his experiences on RingCon so far, being nothing but positive and after that the q&a session began.

One of the first things that were asked was whether Cameron also played the man who was holding the scythe, which he admitted he was not (he thought that they might have hired a stuntman for that scene since scythe’s are very dangerous). He then continued with handing out lolly’s to the persons who knew the three names of farmer Maggots dogs, explained why he wore a wig in his scene (he thought it was to get consistency in the hair of the Hobbits) and told a bit about his Hobbit-feet.

After that he talked for quite a while about his experiences during the Wellington premiere of The Fellowship of the Ring, the wrap party after principal photography had ended (which was the best party he had ever been to) and how The Lord of the Rings really put New Zealand on the movie-map which hopefully for the New Zealand-actors will lead to more work for them as well.

He then spent a long time telling about how everyone in New Zealand was ‘captured’ by the Lord of the Rings-project, and how everyone would talk about it, look at websites about it and saw sets appearing throughout the Wellington and the rest of New Zealand. Another great moment was when someone from the public asked him if he wanted to play out his scene from the Fellowship of the Ring with herself as the Ringwraith. Another person volunteerd to play farmer Maggots dog and off they went. It was great seeing Cameron doing these kinds of things for the fans!

He then told about how he first came in touch with Tolkien’s books, though a school play of ‘The Hobbit’ when he was 11 in which he had the part of Balin, and he still remembered enough of the play to sing a few lines from a song he had to sing back then! He then rounded his panel of by singing an aria which once again showed how much of a multi-talented man he is (Cameron also does some theatre-work as well as teaching acting and accents to in drama-school and some directing every now and then)!

At the end of this hour the conference room had filled up with I guess everyone who was at the convention that day because it was time for the combined Craig Parker and Mark Ferguson-panel. And to be quite honest, I don’t really know what to write about this. The two of them were obviously good friends and during their hour together they would just listen to what people had to ask, joke about pretty much everything that happened, play out a truely brilliant version of the scene between Aragorn and Arwen in Rivendell (yes, again) and much more.

Craig Parker got asked a few questions about his part in the New Zealand stage version of the Rocky Horror Picture Show (in which he is currently playing, he managed to get a few nights off to attend RingCon) and even did a part of the Timewarp! Mark Ferguson would be picking up his camera every now and then to film the audience when there was a funny question. They talked about the BBC parody by Saunders and what’s-the-other-name-again (French, that you Arathorn!) that was aired last Christmas I believe, and they really had a good time on stage. They both admitted being a bit scared of going to Bonn because they had never attended a fan convention before and they didn’t know what to expect and they joked about the people at WETA being ‘brilliant, happy people’ although they quipped that was probably be the case because they worked in all those fumes from the ovens that made all the phrostetics. I will just leave it with saying this was one of these things you just had to see in order to enjoy them!

And then at five o’clock it was time for the closing ceremony which was pretty much the same as the opening ceremony with the exception of the ninth Nazgul that suddenly appeared, knelt down and proposed to a girl in the crowd! As it turned out someone thought it was a good idea to propose to his girlfriend during RingCon and the organisation was more then accomodating. I guess this was one of these typical convention-things that just have to happen sometime during the weekend, but the audience certainly liked it. After they left the stage the two organisers appeared again (Stefan Servos from Herr-der-Ringe-Film.de and Marcel Buelles from the German Tolkien society) and the entore thing switched into German again. After a while Marc B Lee got introduced again (I have to say he did a great job the entire weekend, even though he seemed to suffer of sleep depriviation on sunday) and he introduced all the guests from the entire weekend, the actors last, and there was much rejoicing, cheering and applauding. The actors said some words of thanks to everyone, the audience thanked them, everyone thanked Marc Lee and so and so forth. And with that RingCon officially came to an end…

I think I’ve probably said this a few times before but I just want to stress that it was so much fun and such a great experience. Sure RingCon had a few downsides; almost all of it was in German which was sometimes frustrating for the international visitors and there was a quite a bit of confusion about the program every now and then (especially when it came to the actor-schedules) I think that if they sort a few things out and make a few important decisions about next years RingCon (do we want an international event or only a German event? who do we invite?) it will most likely be even a bigger succes then this years RingCon obviously was!

Zum sluss (isn’t that German?) I would really advise everyone to read Irascian’s reports, the third of which can be found over here, and not just because they feature some great pictures but also because he says some very good things about the general opinions that circulated this weekend!