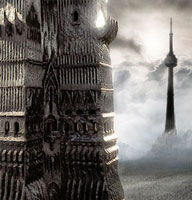 I had the very lucky opportunity to attend the press junket and pre-opening tour of the Two Towers exhibit in Toronto yesterday.

My day started out in Montreal as I woke up early to head to the airport. I took the ‘airbus’ hop over to Toronto (6 hour drive, 58 minute flight…amazing isn’t it?), there was no in-flight meal or any type of entertainment on these short hops between Montreal and Toronto. I had to pay for my morning tea and didn’t get a bite to eat…I landed at the huge Pearson International airport, which I’m convinced was designed by the same bloke who makes those connecting tunnels for your hamsters.

7 moving sidewalks and escalators later I arrived at my rental care desk only to get a phone call from the folks at the exhibit telling me I’m late. I calm them down and re-assure them that I will be there in no less than 45 minutes, this was at 10:45 am.

The rental car place of course lost my reservation, which I made online (so much for the internet! The desk lady said to me) so I had to argue with them to get my car….oh and my Credit Card became de-magnetized as well…still didn’t get anything to eat.

For my troubles the car rental place gave me a very cool blue PT Cruiser to make my way downtown. At 11:20 I made my way down 427 south and generally tried to point my car towards the CN tower, the heart of downtown Toronto.

Remember me telling you that I promised to make it down to the exhibit at 11:15? Well at that time I was most likely heading the wrong direction towards Hamilton and had to find a way to turn around.

I finally arrived sometime after 1pm (YES 1 PM) and managed to get myself re-scheduled alongside all the TV stations and Video reporters. I met some of the producers from the IFC Channel and Space: The Imagination Station, as well as some folks from Reel to Reel and a few other entertainment related TV shows from Toronto.

As I was setting up my camera outside to get some establishing shots of the Planetarium Alan Lee walked past me (right in front pf my camera God bless him), followed by John Howe, Billy Boyd and Dominic Monaghan! I made my quick ‘hellos’ as they were being rushed inside for the press junkets.

Soon all the TV talent (myself included, go internet!) were ushered inside and taken in groups of 3 to interview Chris and Dan Hennah, John Howe and Alan Lee, and the hobbit boys Billy Boyd and Dominic Monaghan.

I was ushered into a small side-room with a huge image of Aragorn hanging on the wall and the shards of Narsil in a glass case beside me. I was admiring the sword that was broken when Chris and Dan Hennah came down the stairs from the exhibit and sat down with me to chat for a while.

Chris and Dan Hennah are the supervising Art Directors for the trilogy, and were in charge for both of the LOTR events in Toronto this year and last. They were as approachable as can be, in the New Zealand manner of laid back friendliness. We spoke about many things, they mentioned jetting off to Paris for the premiere of the Two Towers after this, then back home to work on film 3 (as Dan pointed out that film two is indeed in the can and complete).

We spoke about our Oscar party last year, they expressed dismay that they were unable to attend and made a promise to be there if they are in town that weekend. (I quote: ‘we were forced t go to that Elton John party…’)

When asked about the TTT exhibit you can tell they were truly proud of the Middle-earth magic they’ve created here in southern Canada. It took six whole weeks of hard work getting the environments just right, I will be talking about the amazing exhibit a little later.

Dan mentioned to us that most of the props will have to go back to New Zealand soon as they will be shooting almost 5 months of pick up shots for Return of the King next spring!

I was then brought into a very odd little backroom filled with boxes and electric wiring, John and Alan were sitting together making small talk, old friends catching up on all things Tolkien I imagine.

I asked them what they thought of the exhibit, they were truly in awe by the entire thing. Alan had designed the ‘maps’ used by at the venue to guide people through the various environments, but even he was shocked by what was sheer magic and ‘atmosphere’ created by the art department from New Zealand.

John remarked to me that it was great to be back in Canada, when Alan told him Toronto was wonderful, John quickly remarked that Canada was much more than Toronto…only a non-Torontonian Canadian can appreciate that comment!

The two artists share more than an amazing talent at Tolkien artwork and design; they are also two of the most soft-spoken people I’ve ever met. The fact that Peter, Fran and Philippa based their writing and design on their artwork does not effect them at all. There were no egos in that room (myself not included) as John and Alan were quick to both applaud the other’s wonderful work in FOTR as well as TTT.

Alan told me his favorite set-piece was Edoras, and the Golden Hall. He was so enchanted by the location in New Zealand, the lighting and vistas; he said it was amazing to be there.

John told me that he is most looking foreword to the ‘epic battle scene at the end of the film’, which left me salivating for more information!!!

But alas I was escorted out to meet Billy and Dom, something that I was looking forward to for weeks!

Before yesterday I had the wonderful opportunity to speak with John Rhys-Davies, and meet Ian McKellen, Peter Jackson, Fran Walsh, Richard Taylor and a whole slew of WETA folks. But I had only spoken via emails to the others. This was my chance to sit down with Billy and Dom with no distractions! Little did I know that they’d make their own distractions without the need of outside influences!

I was brought into a little stairwell that leads to the event upstairs. So many items are on display here that even a small little stairwell can hold amazing items to behold! I was waiting for Billy and Dom and perused the display cases, only to see Galadriel’s mirror, her pitcher and crown, as well as Elrond’s crown and Arwen’s necklace.

Billy and Dom waltzed in and immediately started to cause trouble. One of the art decorators, Nancy, was quietly placing name cards in the display cases when Billy and Dom immediately being to rail her up

‘There’s Nancy making an exhibition of herself…’

When I finally managed to get them into a chair to talk Tolkien, they remarked to me that the exhibit upstairs was lovely to behold, and brought back the oddest of memories. ‘The smell,’ Billy explains ‘they must use the same stuff they did during the shoot, for the moss and stuff, because the smell brought me right back to the days we were filming Fangorn forest, in ways only a smell can’.

The exhibit was a great chance for Billy and Dom to get back together as Billy has been working hard in Mexico on the Russell Crowe/Peter Weir film ‘Master and Commander’ and Dom has had some work on and indie production ‘An Insomniac’s Nightmare’ in New York City.

The boys mentioned that they very rarely get their fill of LOTR stuff, because it is all so exciting.

‘We come to events like this (in Toronto) and it reminds us how cool this project was’ Dom explains.

The boys recently got together to record an audio track for the Extended Edition DVD and loved what they saw.

‘It’s great to see all those moments in the movie that give nods to the books,’ Billy says ‘Like that great scene with Dom, Orlando and myself in Lorien with the lembas, great stuff’.

The boys then proceeded to test the locks in the display cases and change the name cards around, much to my delight…but to the dismay of the art directors trying to rein them in!

I was then brought into the exhibit and later attended the opening party. Be sure to check out my report tomorrow covering the party, the exhibit itself and much much more!