I recently got to pay a visit to Electronic Arts to check out their Lord of the Rings games, and as part of that visit I got the chance to play The Two Towers for the Game Boy Advance and chat with the Producer, Josh Hendren. I got set up in a conference room and read old Gaming mags while waiting for Josh to show up. Josh finally arrived and handed me a GBA, the Lord of the Rings theme pouring from the speakers. We discussed the fine points of the game and the license, my hands almost shaking with anticipation all the while. Finally, after what seemed an eternity but was more like five minutes, it was time to play. I went to the character select screen and chose Aragorn. I was quite shocked at what happened next… There was a Full Motion Video collage of The Two Towers footage, actual TTT footage, not gummed down at all. Aragorn, Legolas, Gimli and Helm’s Deep… It was like watching the trailer on a really really small TV. 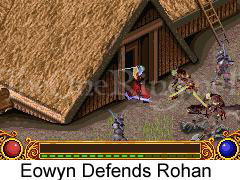 After I propped my jaw back in to place, the game itself began. There’s a little Viggo Mortensen (Aragorn), and here comes a little Miranda Otto (Eowyn), and here’s some sappy dialogue, I hope they don’t use that in the movie. Skip… skip… skip… Here we go. I’ve got to fight my way through the pass of Caradhras. Coolness. I start exploring, leaping in to combat whenever I stumble across an Orc raiding party. Combat is real-time, no turn-based menu scrolling to slow down the gameplay. Combat and the controls in general are very intuitive, and a snap to pick up. By the time Josh got to explaining the controls, I already had them figured out. 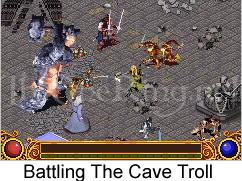 I continue on, when all of a sudden a tree starts shaking. Three Crebain leap out and take flight, I’ve got to kill them before they escape and alert Saruman. I take out two of them with my sword, but the third one gets away. Then a little red eye pops up in the corner, that’s the corruption meter. Things like letting enemies escape and putting on the ring will fill it up, too much and you’ll have the Nazgul nipping at your heels. 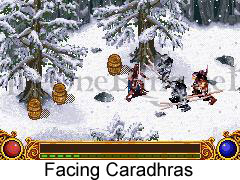 After I was done with Aragorn, I took Legolas out for a spin. Now I had a ranged attack in Legolas‘ bow. I could take out orcs before they got close enough for hand-to-hand combat. But the orcs have archers too, and sitting back and trading shots is a good way to drain your health. Thankfully Legolas also has his daggers, so you can dash in for some close range damage. 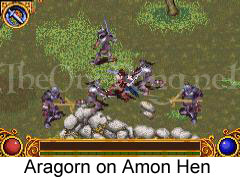 After Legolas, I decide to try Gandalf. Josh worked some de-bug magic and warped me to Moria to check out the cave troll. Now the other members of the Fellowship join in the battle. We get swarmed by orcs but we’re fending them off without trouble. All of a sudden the fearsome cave troll bursts through the wall! It’s kind of hard to translate the cave troll’s awesome size on the GBA’s tiny screen, besides that it’s an awesome rendition, very detailed for a GBA game. Anyway, I cast a couple of spells at him, including one that summons a giant eagle to dive-bomb him with it’s talons, and I dash in for quick slashes with Glamdring. After much hacking the mighty cave troll fell and that was the end of my hands on time with the game. 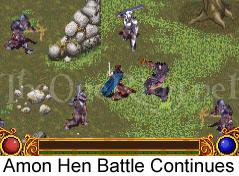 One of the coolest features of the game that I wasn’t able to try is the ability to trade items with a friend. Say you’re playing as Legolas and you pick up a cool sword, and you have a friends with a GBA and a copy of the game who’s playing as Aragorn and has a nice bow that might come in handy for you. Just connect the two GBA’s and trade away. You can even give items to a friend without having to get something in return, I don’t know how popular that feature will be though. 😉 I was also unable to try out the multi-player portion of the game, you can connect two GBA’s for some co-op action with a friend. I can’t wait to try out that feature. 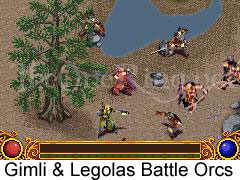 With the movie quality FMV and the sheer size of the game; 35 missions per each of the five characters, multiple skills, hundreds of weapons and items plus unlockable secrets, this game is pushing the GBA to the limits in what it can do. Will the gameplay get lost in the shuffle? From what I played, the game is a blast, sort of a cross between Zelda and Gauntlet with LOTR locations and characters. I was loving every minute of it, which isn’t true of most pocket games for me. EA is intent on making this game as fun and action filled as the movie, and from what I’ve seen, they’re succeeding. But I barely scratched the surface. Hopefully we’ll get some more hands on time with the game soon, and of course we’ll have a full review when the game is completed. Stay tuned to the Havens for all your Lord of the Rings gaming news, and keep an eye out for our upcoming preview of The Two Towers for Playstation 2.