A TREAT FOR TOLKIEN LOVERS YOUNG AND OLD! 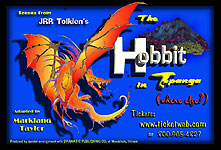 The recent success of the academy award winning film “The Fellowship of the Ring” has introduced a mainstream audience to the classic “Lord of the Rings” trilogy, written by J.R.R. Tolkien. But few outside a group of hardcore fans realize that characters depicted in the movie had their origin in an earlier Tolkien novel, “The Hobbit”. With the next “Lord of the Rings” film installment not due until Christmas, audiences can now whet their Tolkien appetites with a professional theatrical production of this famous prequel.

ComMedia LLC (a doing-business-as name for Klappert Consulting LLC) just signed a contract with Actors’ Equity to assure the best production of the work. With it, Director Jon Ecklund and Producer Walt Klappert have been able to hire veteran actors including Gregory Berger Sobeck and Meg Brogan to fill the boots and hairy feet of Tolkien’s characters. They have also brought on designer Melissa Scheuerman to create the elaborate characters’ costumes and properties that will recreate Middle Earth. The production is based on scenes from the 1991 dramatic adaptation of “The Hobbit” by Markland Taylor by special arrangement with THE DRAMATIC PUBLISHING COMPANY of Woodstock, Illinois.

“The Hobbit”, written in 1937, predated the “Lord of the Rings” trilogy by seventeen years. The novel established the “Middle Earth” fantasy universe, and the familiar characters Gandalf, Bilbo Baggins, Elrond, and Gollum. Most importantly, “The Hobbit” introduced the “One Ring”, the control of which was the central plot point in the later trilogy.

The story begins with the wizard Gandalf recruiting the reluctant hobbit Bilbo Baggins to join him and the dwarf Thorin in a quest to recover a priceless treasure stolen by the evil Dragon Smaug. In their travels, they encounter friendly elves and humans, sinister trolls and goblins, and the riddle-playing Gollum, whose lost ring proves invaluable in the success of their venture.

This is a production for the whole family. The setting of the performance is in scenic Topanga Canyon, which resembles Tolkien’s description of the Hobbit’s Shire.
The play opens Friday, September 28th. Tickets are $19 except for Saturdays when the price is $21.

Tickets can be purchased at ticketweb.com (see CA-Southern or search “hobbit”), or by calling 800-965-4827. The Topanga Comm House is located at 1440 Topanga Canyon Blvd., in Los Angeles.