From: The folks at Houghton Mifflin Books 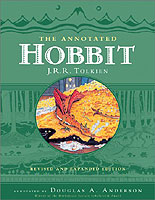 Pick up your copy at Amazon.com today!

A conversation with Douglas A. Anderson about The Annotated Hobbit

What exactly is an “annotated” book? And what precisely can be found in your Annotated Hobbit?

An “annotated” book prints the full of the text being annotated, and in the margins alongside the text the annotator adds commentary. So in The Annotated Hobbit, I have the full of The Hobbit by J.R.R. Tolkien, along with about three hundred annotations, covering Tolkien’s sources and influences, the relationship between The Hobbit and Tolkien’s other writings, and the textual differences when Tolkien revised the book. There are also over a hundred and fifty black-and-white illustrations, including Tolkien’s own artwork, and various artistic interpretations of the story that were published with foreign translations, including Estonian, Japanese, French, Russian, etc. I have also included the longest version of “The Quest of Erebor” by J.R.R. Tolkien, which is a chapter-sized retelling of the story of The Hobbit from Gandalf’s point of view. It was originally intended to be part of an appendix to The Lord of the Rings but was omitted for reasons of space. And there is a long introduction on the writing and publication of the first edition of The Hobbit, and at the back of the book, an appendix on runes, a bibliographical guide to Tolkien’s works, and a detailed listing of the forty-one translations of The Hobbit.

You say Tolkien himself revised the text of The Hobbit. Why?

He actually revised the published text twice. The book was first published in 1937, and after it was successful, Tolkien was pressed for a sequel. He began The Lord of the Rings in December 1937, and the way the sequel grew during the process of writing made it necessary for Tolkien to go back and rewrite the Gollum chapter. In the first edition, Gollum wasn’t quite so nasty a character—Gollum actually shows Bilbo the way out, in return for not being able to provide Bilbo with a present for winning the riddle-game. And Bilbo says goodbye to Gollum as he leaves!

The Lord of the Rings is a work for adults that is a sequel to a children’s book. Can you elaborate on the relationship between the two works?

It’s actually a more complex situation than that. In his early twenties, Tolkien had begun working on an elaborate invented mythology—complex histories and legends of elves and men, with much work on the imagined Elvish languages. This “legendarium” was written and rewritten in various forms throughout Tolkien’s life. A version was published posthumously as The Silmarillion in 1977. The Hobbit began merely as a story Tolkien told to his children as they grew up in Oxford in the early 1930s, but elements from the “Silmarillion” stories crept in. After The Hobbit was published, and the publisher asked to see Tolkien’s other writings, he submitted some of the various legends, but they were not found suitable as a successor to The Hobbit. When Tolkien began to write The Lord of the Rings, an actual sequel to The Hobbit, the new book quickly took on the grander scale and more high tone of the earlier legendarium, and it became as much a sequel to “The Silmarillion” as it was a sequel to The Hobbit.

The first edition of The Annotated Hobbit came out in 1988. What was the original inspiration for your book, and how does the new “revised and expanded” edition differ from the earlier version?

Strangely, the revisions that Tolkien made to the text of The Hobbit were the inspiration for doing the annotated edition. I had known that Tolkien revised the text, and if you are really interested in the details of Tolkien’s invented world and its evolution, you can’t help but wonder what he felt he needed to revise, when he revised it, and why. For such bibliographical work, I photocopied the appropriate editions of The Hobbit, pasted the pages next to each other on one-foot by four-foot sheets, and read them across, using various colored highlighters and pencils to note the changes. I had thought about the possibility of doing a variorum Hobbit, but found that there weren’t really enough changes to justify that. So I thought—well, there are a lot of other interesting things to say, so how about an Annotated Hobbit?

The new revised edition is greatly expanded from what was in the 1988 version. There is at least twice as much text to the annotations themselves, and the introduction is something like four times the size of that in the first edition. There are many more illustrations, and the color insert is new. Plus there are some new items by Tolkien—a few never-before-published poems, including one called “Glip” about a Gollum-like creature written a few years before The Hobbit, and the long version of “The Quest of Erebor” (a shorter version appears in Unfinished Tales, edited by Christopher Tolkien). The design of the new edition is much superior too—the book has a more integrated and comfortable feel to it.

How do you come to be interested in Tolkien?

I first read The Hobbit and The Lord of the Rings when I was thirteen. I was visiting my older sister, who is nine years older than I am, and I was bored and complaining that there was nothing to read. She stomped in from the kitchen, grabbed the Tolkien books, and thrust them at me, saying: “Here. Read these. You’ll like them. Now leave me alone!” And I did like them.

Since then, my interest in Tolkien has evolved through various stages. At first, I relished the simple details of the imagined history of Middle-earth. Then I became interested in the medieval works that were Tolkien’s inspiration, and following that, in Tolkien’s own medieval scholarship. Along the way there came an interest in learning more about the author, and in collecting his complete works, and then in finding the variant forms. I became interested in publishing history, in the literary tradition of fantasy before Tolkien, and in mythology and children’s literature. An ever-widening net, and when I had learned something in any one of these different fields and come back to Tolkien, I could see further depths in what he was doing as a literary writer. And there are many dimensions yet to explore!

What is the most surprising or intriguing thing you uncovered in your research?

Probably that Tolkien did indeed think of hobbits as having pointed ears. There were suggestions of this before, as in a letter where Tolkien refers to hobbits as having “ears only slightly pointed and ‘elvish.’” But there is further evidence. And I had never realized before that in Tolkien’s own illustrations—if you look closely at the really good and large reproductions (like those found in J.R.R. Tolkien: Artist & Illustrator, by Wayne G. Hammond and Christina Scull), you can see Bilbo’s ears are drawn as pointed!

The question of elves and pointed ears is another matter entirely. Tolkien made no close-up drawings of elves, but there is in Tolkien’s notes on Elvish word relationships a mention that Elven ears were more pointed and leaf-shaped than human ones. This statement has sparked many debates. But Christopher Tolkien and I agreed that all that can be said with certainty is that at one time, probably in the mid-1930s, J.R.R. Tolkien held this view.

Click here to read an excerpt from The Annotated Hobbit!