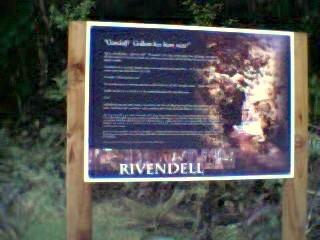 In our paper’s Magazine section in the “Recommended” column was this:

Day Out
What: Kaitoke Regional Park
Where: About 15 Minutes drive north of Upper Hutt
When: Anytime during daylight

It doesn’t take long when you arrive at the Te Marua entrance (wrong it is the Waterworks Road entrance) to this great park to realise why Peter Jackson chose it to film several scenes in The Lord of The Rings. The bush looks other wordly, even though it’s under an hour’s drive from Wellington city.

Of late the park has capitalised on being a setting for the Elvish stronghold Rivendell. The best was to enter the park is from the Waterworks Road entrance which you hit first. There are several signs that point visitors to where filming took palce, as well as small, but detailed, displays of what was filmed. But die-hard Tolkein fans be warned, Jackson hasn’t left behind any sets, giant rubber Hobbit feet or any other evidence that it was used for the triology. Not that it matters because just soaking up the bush and throwing some snarlers (sausages) on the gas- operated barbies is worth the trip. And you can add to the ambience by either attempting to read Lord of Thr Rings in the bush or go all the way and dress up as a Hobbit. … By Tom Cardy.