Super Ringer Spy Trueogre has managed to score some images of the packaging for the various Special Edition Fellowship of the Ring DVD sets that will be released on November 12th.

This image shows the ‘A’ packaging for the 4-disc Special Edition, which is identical to the packaging and artwork of the two-disc set released on August 6, except that the art has a blue hue instead of a rusty yellow hue.

The next packaging, the ‘b’ packaging is a ‘Limited Edition’ case which appears to be like a leather book on the outside, and has the words ‘Extended DVD Version’ on the front. A similar style was adopted for Limited Edition version of the Fellowship of the Ring Soundtrack.

The next packaging, the ‘c’ packaging is the Collector’s DVD Gift Set box, designed by Alan Lee, from an angle that highlights the construction of the box. The gift box includes the ‘b’ packaged 4-DVD set from above, two bookend statuettes by sculptor Sideshow Weta, the National Geographic “Beyond The Movie” DVD, and several collectible Decipher game cards. There is a rumour that a minidisc featuring a ten minute preview of The Two Towers, but that is strictly rumour. 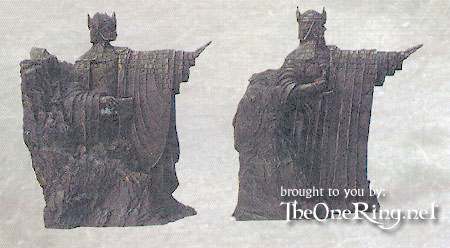 A closer look at the Bookend Statuettes that come with the Collector’s Gift Box, based on the Argonath from Fellowship of the Ring and sculpted by Sideshow Weta.

Finally, we see another shot of the Collector’s DVD Gift Set from the front, clearly showing the spine of the leather-bound Limited Edition case for the four Fellowship of the Ring DVDs. Presumably, the fifth DVD in the set is the National Geographic “Beyond The Movie” documentary.