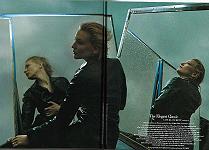 “For all the visual jiggery-pokery on display in FOTR, the greatest special effect of all turned out to be Cate Blanchett’s face, her features as timeless and mysterious as a sphinx’s (or Garbo’s). That such ethereal beauty could still be the product of nature and not some C.G.I. sweatshop, that a woman playing an elf can steal your breath away as no digital Balrog can, must have come as a relief to Hollywood’scarbon-based talent pool. Yes, actors still have their uses. Blanchett showed off three in the space of a single holiday season, nailing roles as diverse as the aforementioned figment of Oxford imagination; a Scottish spy passing for a French housemaid (Charlotte Gray): and, in a performance in which she usurped Cher’s mantle of white-trash-charisma-queen, an all-American slattern named Petal (The Shipping News). Oh, and there was alos her role as the unhinged housewife with flashing eyes in last October’s underappreciated Bandits. More people should have seen her steal the picture.”