Nona writes: This scan was done by “Winter” from the LOTR Info group. It’s an enlargement of one of the pictures from the Variety booklet that’s in the most recent variety. As you can see – Boromir is clearly not Sean Bean! 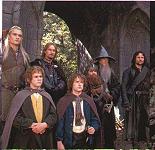 There’s also some question as to whether some of the other actors are really who they’re supposed to be – although Winter says it’s her scanner, and they all are who they are – except Boromir.

So…who is Boromir? Is it Sean Bean’s stand-in? Is it the “tall” Boromir (for when the Hobbits are played by their normal-sized actors). And why is Sean Bean missing from the picture? (as well as the two other Hobbits)?

Xoanon here, I think this may just be a stand in for Sean Bean, who knows, he may have been unavailable for this shot, or perhaps they were going to digitally place Sean’s face over this stand-in, personally I think it’s funny, but I’m curious to know who that fellow is, and if you’re reading this drop me a line!