The Fashion Institute of Design & Merchandising in Los Angeles still has its 10th anniversary show “The Art of Motion Picture Costume Design Exhibit” up and running.

They have a single costume from the past 10 years worth of nominees in the entryway. Then the galleries opened to this year’s nominees (and a few others).

Totally dominating the room was none other than Sauron! He was flanked by Gandalf, Strider, Frodo (from Bilbo’s party), a Gondorian warrior, Saruman, and Galadriel. These costumes blew the competition out of the water! Sauron points his finger menacingly across the room at Satin (Nicole Kidman) from Moulin Rouge… you expect him to bash the cast of Gossford park out of his way with his mighty mace to seize the French courtesan for his own. Or perhaps he is only after her necklace – having a thing for jewelry himself. 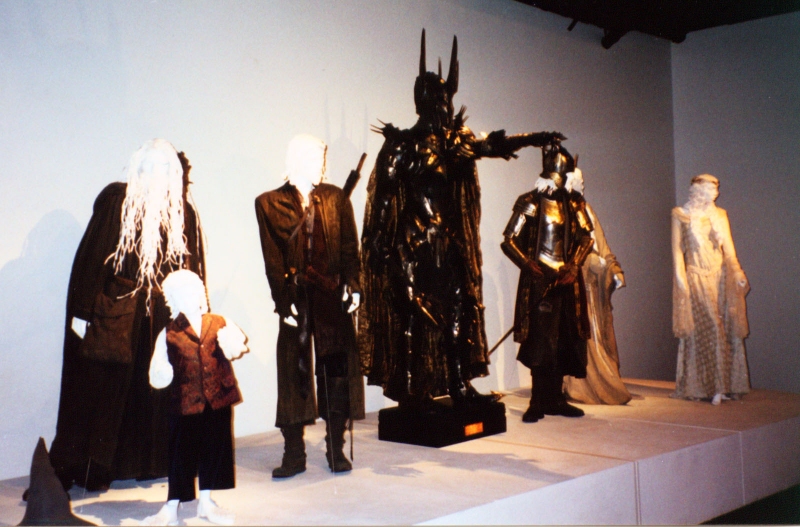 But seriously, nothing else comes close to the utter detail – the care – the realism – of the Lord of the Rings costumes. Harry Potter looks sadly plain. Planet of the Apes looks flea bitten. Only Moulin Rouge could possibly hold a candle with its flash and detail come March 24th when the Oscars are announced.

Let’s keep our fingers crossed for a definite win on this nomination!

I snapped some shots before being stopped by security. I would have gotten some closer shots had it been allowed. Hopefully these shots will encourage folks in the LA area to go see the exhibit – it is well worth it.