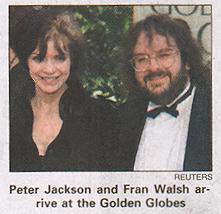 Keri sends along this image and article from ‘The Dominion’.

THE movie critics have spoken and the news was not good for Kiwi film-maker Peter Jackson, whose box office blockbuster The Fellowship of the Ring missed out on four Golden Globe awards last night.

There was some compensation, with New Zealand-born actor Russell Crowe winning the award for best actor in Ron Howard’s A Beautiful Mind.

The first film in the Lord of the Rings trilogy, which has grossed more than US$500 million (NZ$1.2 billion) worldwide, was nominated for four awards – best director, best picture, best score and best song.

The best director title went to Robert Altman, who was the favourite to win with Gosford Park, a 1930s comedy of morals and murder. A Beautiful Mind robbed Jackson of the best picture award, and Craig Armstrong’s music for Moulin Rouge beat Howard Shore’s score for The Fellowship of the Ring. Sting’s theme song for Kate & Leopold won over Enya’s haunting song May It Be. Jackson, who was at the awards with Rings actors Sir Ian McKellen and Elijah Wood, said he was not disappointed.

“Film-making is not really like a sports event and the concept that. . . you’ve directed a movie but you’re like in the Olympics at the beginning of the sprint and you’re looking at your competitors.

“We’re not sportsmen, we make movies for audiences to enjoy. The competitive thing is a little weird. “

As the nominations were being read, Jackson admitted that the prospect of getting up in front of two billion people made him

“hope like hell” his name would not be read out.

Sir Ian said the response to the film by many at the awards was enthusiastic.

“When Jack Nicholson likes your movie as much as he did, you don’t worry too much if the Golden Globe people didn’t. .

“Don’t be disappointed, New Zealand. This is your movie and it’s doing really well all over the world.”

The Golden Globe awards are., held in Los Angeles and are chosen by foreign entertainment journalists. They are often said to be an accurate forecast of the Oscars in March.

However, New Zealand Film Commission chairman Alan SorreIl said there was hope yet for an Oscar for The Fellowship of the Ring. “There may well be a different outcome at the Academy Awards, given that this is a critics’ choice, while the academy is comprised of a broad group of people, ranging from directors of photography to film producers – people who have been in the film industry for years.”

Mr Sorrell said the Academy Awards took the popularity of a film into account more when dishing out the honours than the Golden Globe awards did. The outcome of the Golden Globe awards was disappointing, he said, but it was a great day for Australasia, with Australian actress Nicole Kidman named best actress in a musical or comedy for her part in Moulin Rouge, and Crowe’s best actor award. In A Beautiful Mind, Crowe played Princeton’ mathematician John Nash, who won a Nobel prize for economics after years in a battle with schizophrenia.